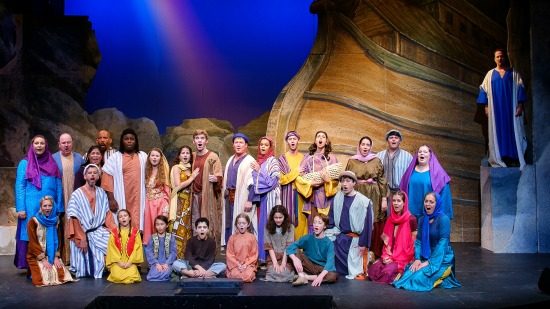 The Cast of ‘Children of Eden.’ Photo provided by 2nd Star Productions.

Children of Eden, produced by 2nd Star Productions, is on stage at the Bowie Playhouse in White Marsh Park. Original music and lyrics are by Stephen Schwartz and book by John Caird. 2nd Star’s production is directed by Vincent Musgrave, the assistant director is Nathan Bowen, the musical director is Joe Biddle, and is produced by Jane B. Wingard.

Based on the book of Genesis, Children of Eden is an honest and thought-provoking interpretation of how Father, Adam, Eve, Noah, and Mama Noah deal with their rebellious children’s life decisions and the repercussions – hence, freedom of choice. Additionally, it explains the age-old question as to why generations of humans are unable to hear Father’s (aka God, higher-power, Universe, etc.) voice. 2nd Star certainly presents an elaborate production from the large interchangeable set pieces, to the bright and brilliant costumes, and a cast that offers quite a few vocal surprises.

‘Children of Eden’ is full of surprises… and this production reveals a true collaborative effort and how wonderful live theatre truly is.

The opening number, “Let There Be,” coordinates small hand-held LED lights with the movement of the ensemble cast is quite a unique feature. The barren set made of varying levels of “stone” is later dressed with cascading flowers and bright green palm trees to represent the Garden of Eden. Here the ensemble storytellers are costumed in khaki shorts or capris with white or beige shirts that blend with the scenery.

Chad Wheeler assumed the role of Father (while Chris Overly was recuperating) and even though he was on book, he still commanded the stage. He presented this character with a calming authority that did not require a booming voice to get his messages across to his children. Kudos to Wheeler for stepping in and making Father a likable character while explaining of the teachings of Genesis. Note that Chris Overly will resume the role of Father the first weekend in October.

The role of Adam played by E. Lee Nicol is a departure from his former roles (Annie, Legally Blonde and Sound of Music). In the beginning, Nicol plays Adam as naïve as he marvels naming the creatures in “The Naming.” He continues by naming a million bugs but as Eve eats of the forbidden fruit, Adam’s persona shifts. He too eats the same fruit causing them to hide from Father. Nichol clearly shows Adam’s anguish when Father asks him to choose between Him and Eve.

Caelyn Sommerville plays both Eve and Mama Noah. A tiny gal, she too has a commanding presence on stage. She plays Eve as full of curiosity and wonderment as she visits the tree of knowledge, wanting to share her discovery with Adam. This scene is full of clever lighting cues that enhance Adam and Eve’s experience. As Adam shows a disinterest, Eve sings of her desire for new experiences in “The Spark of Creation.” Temptation comes to her in the form a snake in the garden in the song “In Pursuit of Excellence.”

The golden snake storytellers are consist of Robbie Dinsmore (Ham), Dakarai Brown (Shem), Tara Herbert, Erin Lorenz, and Malarie Novotny. A tremendous effort was not only put into the design of the snake but the choreography as well. The snake slithers his way around the stage both high and low as he dances around Eve, enticing her. Adam makes his choice in the song, “A World Without You.” Wheeler, Nicol, and Sommerville blend their voices to create a lyrical harmony.

Creed Jackson as Young Cain/Storyteller and Andrew Sharpe as Young Abel/Storyteller have great chemistry as the famous brothers and off-spring of Adam and Eve. Jackson and Sharpe show the playful side of Cain and Abel but as they grow older, adult Cain played by Austin Dare and Daniel Starnes as adult Abel, become opposites in personalities and actions. Cain is like Eve, adventuresome whereas Abel is clearly his father’s son, wanting to remain “Close to Home.” It is in the song, “The Mark of Cain,” that is just what Father does, because Cain killed Abel.

Time marches on and so has an aged Eve since Adam has died. Her third son, Seth is now married with children. Father returns to tell Eve that Cain is alive. As she asks more questions of Father, he disappears on her. “Children of Eden” has Eve and the storytellers dreaming of when they will return to their true home: Paradise.

In Act II, Nichol is Noah and presented as a wise man who is committed to listening and following the words of Father’s. The Noah storytelling is elaborate with the flying-in of the exterior and then the interior of the Ark. “Generation” is an upbeat number sung by the ensemble of storytellers that emulates a Bollywood theme. The storytellers are now dressed in layered tunics, pants and some with headdresses. Their beige ensembles have been replaced with brilliant turquoise, purples, green and orange colored outfits.
A thousand years later, Adam’s line has led to Noah and his three sons: Shem, Ham, and Japheth (Daniel Starnes). Noah’s worries are mounting with Father wanting Noah to finish the ark, so he can flood the world to destroy Cain’s line. The youngest of Noah’s sons, Japheth is not married but he will be presented his bride at dinner, in the song “A Piece of Eight.”

At dinner, Japheth announces he wishes to marry Yonah played by Alexandra Baca. She is a beautiful servant girl that Japheth is forbidden to take on the ark because she bears the mark of Cain. Japheth storms off as the animals start making their way to the ark in “The Return of the Animals.” This is a magnificent number as animals enter two by two – turtles, peacocks, and zebras to name a few. Not only is this a highlight of the show, it is cleverly choreographed and full of surprises.

After everyone has boarded the ark, Noah sees Yonah standing alone and apologizes that he cannot take her with them. Yonah’s solo, “Stranger To The Rain” is heartfelt as she is willing to accept her fate. However, Japheth finds Yonah, telling her Father is wrong and hides her in the ark. “In Whatever Time We Have” Japheth and Yonah declare their love for one another. As Japheth pulls Yonah into the ark, “The Flood” begins with Father sending down more rain.

After forty days and forty nights of rain, food running out, and Noah and his family getting anxious, they question, “What Is He Waiting For?” performed by Ham (Robbie Dinsmore), Shem (Dakarai Brown), Aphra (Erika Jureckson) and Aysha (Geneva Croteau).

Yonah sends a dove to find land during the song, “Sailor Of The Skies” because she is worried she is the reason why the rains have not stopped. Shem and Ham find Yonah on the ark and confess to Noah who is disappointed. A fight ensues and Japheth almost kills Ham, but Yonah stands in the way. Japheth backs down as Mama Noah (Caelyn Sommerville) speaks up. When Noah is alone with his wife, he reveals that Father no longer speaks to him and Mama says he must be the Father now.

Nicol again shows his character’s angst as Noah reflects on the difficulty of being a father to sons who makes their own choices in the song, “The Hardest Part of Love.” Father realizes he has to let humanity makes its own choices. Noah then lets Japheth and Yonah marry. With the return of the dove with an olive branch, the stars come out and later the sun as the ark lands at Mount Ararat.

The three sons decide to travel in different directions with different animals while Japheth announces he will search for Eden. Noah says goodbye to his children, ending with, “In The Beginning” where Father promises not to destroy the earth again and to let humanity take responsibility for its own fate.

Children of Eden is full of surprises from Jane B. Wingard’s elaborate set design, Garrett Hyde’s spectacular lighting design, Linda Swann’s stunning costume designs, and the magnificent vocals from a dedicated cast. This production reveals a true collaborative effort and how wonderful live theatre truly is.

Advisory: Certain lighting features may not be suitable for all audience members. Also, allot for extra time if sporting events are taking place in the park.