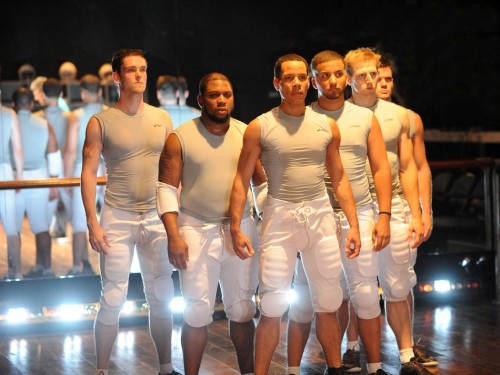 Part of the cast of COLOSSAL. Photo by Stan Barouh

The timing of the National New Play Network Rolling World Premiere production of Colossal could not be better.  The play is about football (the new season has just begun); it’s about a gay male player dealing with the macho world of organized sports (the journey of openly gay football player Michael Sam has caught the nation’s attention); football injuries (constantly in the news); and it’s about love and family (always timely).

Colossal, written by Andrew Hinderaker, makes its debut at the Olney Theatre Center before the new play appears in three other venues in the country.  Director Will Davis guides the talented all-male cast with great skill accentuating the physicality of football and dance and how these conflicting elements can sometime be fused.  The visuals are as much a part of this unconventional play as the dialogue.

If a set could define a production, Micha Kachman’s design clearly does. Olney’s Mulitz-Gudelsky Theatre Lab was converted into a miniature football stadium consisting of four rows of grandstand seating the length of and on opposite sides of the black-box stage with an overhanging electronic scoreboard and functional clock.  The latter is used to denote the play’s structure that contains 15-minute quarters, a pre-game and a halftime and is a metaphor for how the time in our lives is precious and finite.  There is also a dance barre and mirror at one end and lockers on the opposite end.

As the audience makes its way to their seats, a squad of college football players (seven in the production but they symbolized a full team) are already performing their pre-game drills on the stage to the commands and cadences of their coach played well by KenYatta Rogers with thumping, percussive music in the background. Juxtaposed in the drills is Damon, not a footballer, played splendidly by Steve Ochoa, dancing elegantly on the stage while the players grunted through their paces.

These effects plus the moods depicted throughout the play are bolstered by Colin K. Bill’s lighting design and Chris Baine’s sound design.

…under the direction of Will Davis, this vibrant, talented cast crosses the goal line before the clock runs out.

Co-captains Mike (Joseph Carlson) and Marcus (Jon Hudson Odom) bark out additional commands and signals as part of the drills that included vigorous and fast-paced, sweat- producing blocking, tackling, passing and running plays, spreading across the stage. But to Mike, Marcus is more than just a co-captain to him.

All this action and that which transpires throughout is superbly choreographed by Christopher D’Amboise and Fight and Movement Choreographer Ben Cunis. The precise and beautifully performed dance movements by the cast are especially evident during the “halftime show” and was one of the highlights of the production.

Costume designer Ivania Stack fitted this well-built team with football pants, shoulder pads, helmets, and tight, sleeveless shirts (not jerseys) revealing some pretty well-defined biceps and triceps. Besides Odom and Carlson, the other players are Sam Faria, Will Hayes, Jeff Kirkman III, Michael Litchfield and Matthew Ward.  All are outstanding in their precision, physicality, coordination and timing.

Colossal’s story centers on Mike played convincingly by Michael Patrick Thornton, a veteran of theatre and television. After a bad tackle (leading with his head) to protect his love interest Marcus (Odom), he was left paralyzed from his waist down and is confined to a wheelchair.

Through flashbacks, Mike relives his younger days in his mind and the challenges he faced dealing with his loss of identity as how such a vibrant, athletic specimen could be restricted to a wheelchair.   Young Mike (Carlson) plays out those memories exceptionally with high-powered energy and immense physicality.

Damon (Steve Ochoa), Mike’s choreographer father, had hoped his son would have been a dancer in the company he runs. In one of the play’s few light moments, Young Mike mused how his father, is probably the only one in the country where he was disappointed his son chose football over dance.

Present-day Mike’s interactions with Jerry, a physical therapist who is also gay (played nicely by James Whalen), and his father reveal the physical and emotional demons that are plaguing him and the challenges of moving on. Mike’s relationships with his father and with Marcus are poignant and provide emotional lift to the drama.

Mr. Hinderaker wrote Colossal for Thornton, who had suffered a spinal stroke in 2003 that left him paralyzed from the neck down.  After intense rehabilitation, Thornton eventually regained use of his upper body and returned to acting and became a powerful disabilities advocate in the theatre industry, according to Olney’s artistic director Jason Loewith.

Colossal touches on such issues as disabilities, homophobia in the locker room, football injuries, and family relations.  In the compact 75 minutes of the play, however, there isn’t enough time to explore each of these issues with the depth they deserve.  Nonetheless, under the direction of Will Davis, this vibrant, talented cast crosses the goal line before the clock runs out.

Running time: One hour and 15 minutes.

Advisory: This play contains profanity and adult situations and is not recommended to children under age 14.