Theatre Review: ‘Dirty Dancing – The Classic Story On Stage’ at the National Theatre 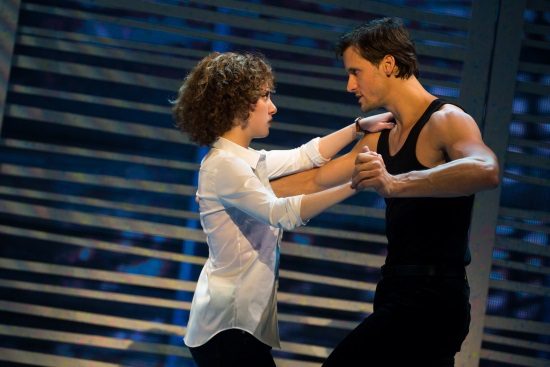 …truly a unique spectacular of the first order.

It’s the summer of 1963 and the Houseman family, Mark Elliot Wilson (Dr. Jake Houseman), Caralyn Kozlowski (Marjorie Houseman), Emily Rice (Lisa Houseman) and Jillian Mueller (Frances “Baby” Houseman) is on vacation at Kellerman’s resort, Gary Lynch (Max Kellerman) and Jerome Harmann-Hardeman (Tito Suarez), in New York’s Catskill Mountains. The Beatles have not set foot in America; John F. Kennedy is alive and well and seventeen year old Frances “Baby” (Jillian Mueller) believes in no man on Earth as much as she does her father.

Surrounded by Kellerman waiters from Harvard and Yale Universities with plastic smiles and relentlessly pursued by Kellerman’s kind-hearted, yet misogynistic grandson Neil (Jesse Liebman), it is not long before Baby stumbles upon the staff quarters. Wide-eyed and mesmerized by the heated sexuality and fervor of the staff dancers, Baby is drawn onto the dance floor by the resort’s sexy dance instructor Johnny Castle (Samuel Pergande). Inevitably, she becomes entangled in their cares, testing her relationship with her father and challenging her efficacy of the values she holds dear. Encircled by turmoil, Baby and Johnny find refuge in each other, embarking on a relationship based on mutual compassion, vulnerability and implicit trust – and the love of dance!

From her permed head of hair (courtesy of hair designer Bernie Ardia) to her white Keds, Jillian Mueller is Baby personified. A superb actress, Mueller approaches her role of Baby with the same amount of determination and enthusiasm that Baby herself had during her time at Kellerman’s. A towering giant of a man and an extraordinarily gifted dancer, Samuel Pergande (Johnny) is convincingly and heart-breakingly disillusioned and vulnerable. The chemistry between Pergande and Mueller is unpracticed and palpably electric. United on stage, they professionally execute well-known scenes from Dirty Dancing the film with stunning originality of feeling (“Love Is Strange,” “Hungry Eyes” and “(I’ve Had) The Time of My Life”).

Smartly devised, Dirty Dancing – The Classic Story On Stage is written to allow its actors, singers and dancers to do what they do best. The singers sing, the actors act, the dancers dance and those that can truly do both are featured to the best advantage. Jenlee Shallow, a lithe and graceful dancer and dynamic vocalist, opens the production as a sensationally posed shadow projected the height of the theatre, setting the tone for the entire performance (“Opening/This Magic Moment Merengue”).

In a captivating subplot, Shallow and Doug Carpenter’s (Billy Kostecki/Singer) characters express through song their mutually, suppressed desire for each other. Carpenter’s gifts as a comedian and actor are only outmatched by his truly compelling vocals. Together, Shallow and Carpenter close the performance with a truly remarkable version of “(I’ve Had) The Time Of My Life.” Standout numbers include “You Don’t Own Me,” “In The Still Of The Night (I’ll Remember),” and “This Magic Moment Merengue.” I cannot give enough praise to these two individuals.

Emily Rice (Lisa Houseman) brought down the house with her perfectly timed and genuinely hysterical version of “Lisa’s Hula” and Jesse Liebman’s (Neil Kellerman) recitation of “Kellerman’s Anthem” brought me right back to my parent’s couch in 1999, watching Dirty Dancing for the first time.

Director James Powell’s decision to stage the production minimally, incorporating sliding, interactive television screens to project images of the Kellerman’s resort reminiscent of those from the original movie, allowed the dancers and actors room to maneuver artfully on a relatively small stage. Just the right amount of reliance on pantomime, smartly choreographed and intentionally a little goofy, showed that the production did not take itself too seriously and put its trust in the ability of its actors. The result is a production that retains its truthfulness and presents no barriers between itself and the audience.

Eleanor Bergstein originally wrote Dirty Dancing because she loves to dance and she believes “that everyone has a secret dancer inside them.” I could not agree more; Dirty Dancing – The Classic Story On Stage made me feel like I can dance!