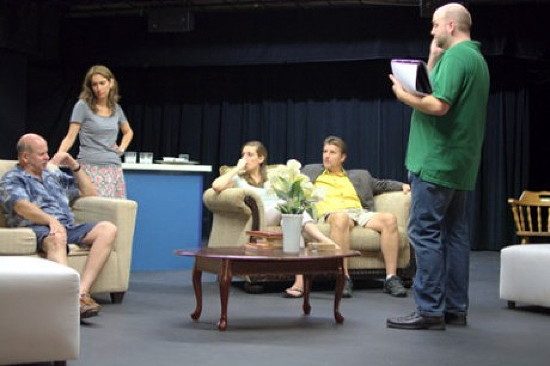 God of Carnage, now playing at Silver Spring Stage was originally written in French, by playwright Yasmina Reza, but has since gained international popularity. Carnage is translated by Christopher Hampton, directed by Adam R. Adkins and produced by Bob Scott.

The opening act depicts two sets of parents sitting down to discuss an altercation that occurred between their two 11-year old sons. Alan and Annette were invited over Michael and Veronica’s house to find resolve.

I felt that the audience was pulled into every movement and every scene with ease.

At first glance, it was obvious that Alan and Annette were out of touch with one another. Andrew Greenleaf (Allen) did a wonderful job playing a narcissist attorney for a pharmaceutical company. Throughout much of the play he is engaged in settling a dispute with his client’s product. The audience is forced to listen to  his annoying phone conversations since he refuses to miss a call. His wife, Annette, played by Lauren Kieler, comes across as a desperate housewife. We never know exactly what she did but she introduced herself as a wealth management specialist. She is nicely dressed and self-poised.

Bob Harbaum played Michael, a hardware store owner. I could feel his energy radiate off the stage as he portrayed himself as the sort of guy that would prefer to unwind with a cold one. I loved how he managed to convince us that he was a laid back blue collar worker. The way he walked, talked and sat reminded me of someone familiar, so I really took to his character.  Veronica, played by Alyssa Sanders, is a writer with a special interest in Darfur. She finds pleasure in perceptions, books and art. She did a terrific job at playing a pompous woman who is more than eager to control the direction of conversation. Whenever someone mentioned something other than what she believed to be true, she turned the conversation in another direction. She was so convincing in her role that the entire play I said to myself, “I don’t like that woman,” (speaking of the character of course).

After a few shots of rum, poured by Michael, and multiple debates about parting ways, the couples display unruly behavior. They become entangled in a web of disagreements that seemed impossible to resolve. The bickering between the cast heightens to subjects outside of the altercation that brought them together. No subject is off-limits and everyone seems to have a strong opinion about everything. At some point in time everyone argued and sided with someone other than their spouse.

The cast worked well together. They made the shift in emotions seem effortless. However, it was Alyssa Sanders that nearly stole the show with the range of emotions she had to display within a 90 minute show!

Overall, the play is well written, it is packed with serious themes, but also humor and wit. The 90 minutes doesn’t feel as long, mainly in part because the actors did a good job of capturing our attention.

The Silver Spring Stage is a very comfortable and intimate theatre that allows the audience to enjoy the show no matter where they sit. Even on the second night of performance, in a nearly packed theatre, the actors were easy to hear without the use of microphones. I felt that the audience was pulled into every movement and every scene with ease.

Advisory: Offensive language, some prejudice concepts and some homophobic slurs.