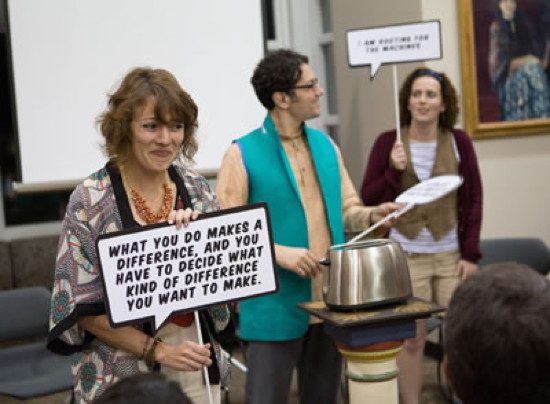 Dozens entered the Arnold & Porter LLP building on September 19, 2014 for dog & pony dc’s “participatory-performance-meets-science fair” production of Toast. Encouraged to arrive thirty minutes prior to curtain, audience members wandered around a semi-circle of exhibits cast members dutifully set up. Similar to an adult set-up of a science fair, attendees had the opportunity to explore the exhibits and ponder over the abstract and scientific displays. One display in particular that stood out was of a dissected toaster. Originally her 5th grade science project, display-owner Rebecca took apart her grandparent’s toaster (one of many that they collect), to analyze not only the structure, but also the process of infrared radiation that is responsible for transmitting heat onto the bread. This created a great segue into the “toaster” theme of the event, blended with their goal for innovations and creations.

Already stealing the show with his indie-meets-artsy outfit was Chris Gertner (played by Tyrone Giordano).  Giordano was dressed in sleek black pants, sweater and top hat, with a light patterned blue scarf thrown over his shoulder.  To top of the dark-yet-creative look were his perfectly round sunglasses he wore although we were inside.  Rummaging through the audience as they admired the exhibits, he casually chimed into groups it was difficult to figure out if he was part of the production team or just an onlooker.  Once bells started ringing to seat the audience is when we realized he was in fact one of the cast members of the production.

The cast of Toast played a secret society of inventors in The Order of Wind and Lightning, founded by Ben Franklin. Within their society, they relied on the ideas and innovations of the audience members like us to help brainstorm ways that technology can advance our lives. Directed by Rachel Grossman, Ivania Stack and Wyckham Avery, cast members Tyrone Giordano, Jon Reynolds, Melanie Harker, Tamieka Chavis, Jared Mezzocchi and Lindsey D. Snyder played characters ranging from professors to industrial and natural science experts. The convincing “staff” presentations (played by cast members), made it hard to differentiate if these cast members were PhD candidates in real life, or just play off the vocabulary as if they are.

Once seated, Alex Billings (played by Lindsey D. Synder) starts off with rhetorical questions to the audience – “What makes a coral reef a biological entity?” This leads into a short introduction describing the complexity of an ecosystem and reoccurring patterns, in turn leading to one of the goals of Toast – using a metaphorical approach to science. Synder continues her narration to further say “we recognize that there is genius in each of you,” and welcomes the audience to the production of Toast.

The bold, exuberant Joey Lane (played by Tamieka Chavis) takes the stage, soaring around the audience while narrating Darwin’s theory of evolution.  Mocking beak sizes on her participants, Chavis gets the point across as she compares the evolution theory to advancement in technology today.

The cast creates a convincing atmosphere, much like team-building activities set up on business trips and retreats, right down to a film reel of what exactly the “Order of Wind and Lightning” is about. These scientists add in hints of comedy throughout such scenes that could otherwise be very mundane and plain. One main disclosure agreement popped up during the film stating that the viewing of this tape is confidential – the cast assured us that this “film is outdated” and no one would be going to jail.

Sam Jordan (played by Melanie Harker) plays a peppy, energetic industrial sciences expert as she explains our reason for being in the platform meeting.  Harker pulls up a powerpoint she beams proudly over, and skims through mission statements and company specifications.  The topic was a bit dense and too seemingly corporate to follow, but Harker’s enthusiasm and mile-a-minute narration helped keep the audience engaged.

Dr. Thinkerman, an expert in domestic sciences, was introduced as having a philosophy that no one person holds the same ideas – the main premise to for this production. This is when the cast calls in audience members like us to collaborate, and imagine just what the future could be. Cue the team-building, hands on activities.

At this point, the audience seemed to be able to take their reactions in either direction. Audience participation began during team building activities, where they were broken up into five groups. I had the pleasure of having Chavis as my group director.  Her calming, patient persona set the mood in our intimate group setting as she instructed our team-building activity.  As she walked us through our routines, some audience members seemed to be engaged and analytical on the topic, while others remained wide-eyed and confused.

Having an outgoing audience is key to supplement the already outgoing cast of Toast. The cast did not hold back in making audience members feel welcome from showing them around opening exhibits, to engaging all members’ in-group seminars. Similar to the audience being torn in how to react to team-building exercises, they have to come in to the innovation topics with an open mind as well. We got lucky in our performance night and seemed to have a variety of actors tucked into our audience. One participant presented his group’s innovation, and comically acted out a piece of toast being “All alone in a stainless steel world,” before collapsing to the floor in dramatization. Toast brings in opportunities for introverts and extroverts alike, as they have the environment to express ideas in an intimate setting or one with all eyes on them.

Stage managers Danielle Barlow and David Kessler did an excellent job coordinating all the technology used in the production, and the slight stage directions needed.  This play was not heavy on props or set designs, but more-so used the actors’ body language and movement to convey their enthusiasm about this topic.

I came into this play having read up a synopsis on it, attempting to familiarize myself with the storyline, but seemed to not have it clear.  After the performance was over, I would say that my understanding was a little clearer, but I still remain with some unanswered questions.  Toast does create a wonderful change of pace to a monotonous work week.

All the actors were every bit convincing, but the story line could have been more engaging and less technical to the non-entrepreneurs and experimenters in the audience (like myself).  Additionally, don’t let the two-hour time frame fool you – the ending may be rushed as you race to collaborate all the innovations from the audience.  As a theatre fan, I would have preferred a more scripted, less group-discussion take on this topic.  However, as a participatory piece, the social aspect may have gotten a bit carried away, but overall seemed to keep the audience satisfied.

Advisory: No adult language, but due to the audience participation most likely best for children over age 13.

Show information: Premiering across DC and Maryland until October 18, with tickets ranging from play-then-play to $25.00.  Tickets can be purchased through dog & pony dc’s website.

Emily Menase is a recent graduate from The University of Maryland, College Park with a B.S. in Kinesiology. She stage managed and participated in eight theatre productions in high school, and has been writing for student newspapers for five years. She currently works at a research organization in Gaithersburg, MD.