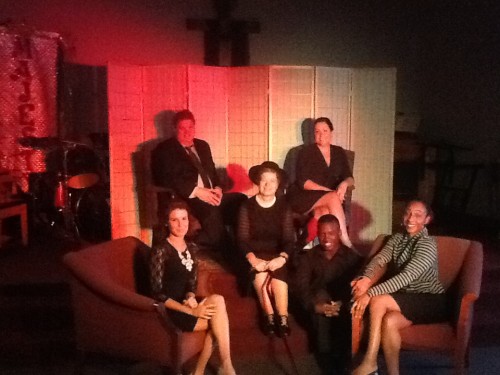 In light of recent celebrity headlines, the timing of Wolfpack Theatre Company’s production of Masquerade could not be more poignant. Written and Directed by William Leary, Masquerade was produced in cooperation with Community Crisis Services, Inc., and is in production at the Charis Arts Center in Old Bowie antique district.

There is no doubt, Masquerade is a serious play about a serious subject matter: suicide. It explores the after effects on immediate family members and that there are more questions to be asked, then answers to be given. It is an excruciating act with undeniable circumstances and this cast demonstrates that as they run the gambit of emotions as to why their brother, their son, their friend put a gun to his head and pulled the trigger.

The play takes place in the office of their Pastor. The stage is set with high back chairs that flank either side of an end table. There is a bench upstage center accompanied by several angel figurines. The beautiful wooden desk that appears to be reminiscent of the 1930s era belongs to the Pastor. There is another set of chairs that surround an end table with a reading lamp. The set influences the actor’s movement and stage blocking in a distinctive way.

The uniqueness of this play is how each actor is strategically placed in order to make the six opening and closing monologues work — and it did. Sarah Scott plays the role of Kelli and we learn through her that it is her brother Kevin (unseen character) who killed himself. Scott is a petite woman but powerful with her character’s emotional convictions. Her anger is obvious but is converted into sarcasm and animosity toward her mother. Kelli has no problem making her mother’s drinking problem know with punishing retorts. However, Scott shows a softer side in Kelli, who offers endless emotional support toward her brother Kyle. Scott is a driving force in this role and has a promising future in theatre.

‘Masquerade’ is powerful and brave production that should not be missed.

Carol V. Calhoun is remarkable and the voice of reason as sensible Grandma Emma. At first, she plays her character matter-of-fact intertwined with a little angst. As the show progresses and the other characters offer up confessions, she offers reasonable responses. The wonderful surprise though is when Emma gives Kelli and Kyle some serious tough love and Calhoun delivers with confidence and pure emotion.

Kelly Richards plays Pastor Diana and shows a vulnerable side to how a spiritual leader can become disheveled and question their own faith. Richards is posed in this role, maintaining her characters emotions for the sake of the family. Pastor Diana’s struggles are subtle but they are there. She comforts each family member the best she can but openly admits she does not have all the spiritual answers. Richards and Calhoun share a wonderful round-robin conversation, but it is a bit awkward that a portion of this dialogue takes place behind the audience.

Tim Jansen explodes with anger and blame as Kevin’s father Steven. It’s easy to empathize with dear ol’ dad as he questions if his son’s suicide is his fault. He pretty much was an emotionally distant father and husband, but his argument is that he was a good provider and his children’s trust funds prove it. He regrets discouraging Kevin from moving to Key West. Jansen keeps his character’s weepy emotions on the inside but the anguish is real. This character does a lot of shouting but it validates how little anyone listened to dad.

Alie Kamara is Kevin’s brother, Kyle and feels responsible for Kevin’s death. In Act I, he eludes to knowing something about his brother’s suicide but Kelli discourages him and repeatedly tells Kyle to leave it alone. In Act II, Kamara gives a moving and sophisticated monologue of Kevin’s writing he created while the two brothers ventured down to Key West. Even though Kyle has some hot button issues to resolve, Kamara portrays this character as if he is doing just that – getting the help he needs before he ends up like Kevin.

Francine Joyce Kent takes on the role of the distraught mother, Janet. This is by far, the most emotional character of the show and a challenging role to jump into at the last minute, replacing Lauren Giglio. Kent truly delivers. In Act I, Janet is just a mess and obsessed with Aunt Bev (unseen) waiting at the house, what food should be served and if it’s not her daughter Kelli yelling at her, it’s the voices in her head. Act II, Janet transforms into a flake thanks to the gallon bottle of wine Kelli retrieves from her car. She dances around while sucking down her liquid courage to face that she “has become a shell; a piece of me died when Kevin pulled the trigger.”

Masquerade is powerful and brave production that should not be missed. It does not preach, under mind, or even give answers to the act or the aftermath of what happens when someone dares to take their own life. Director Leary’s hope was to open up dialogue about a very taboo subject and he and the cast accomplish this in a very real way.