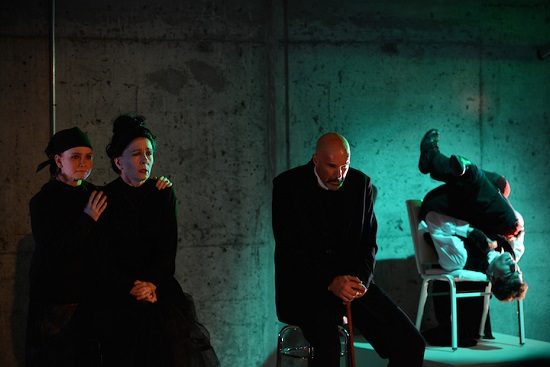 The broad reach and influence of Franz Kafka’s deeply disturbing, yet funny, story Metamorphosis is illustrated by a line in Mel Brooks’ 1968 film The Producers. Desperate to underwrite a flop, the two protagonists stay up all night exchanging ideas for terrible plots. When the Gene Wilder character suggests, “One morning Gregor Samsa woke up to find himself a giant cockroach,” the Zero Mostel character dismisses it with, “Too good.”

Indeed. Metamorphosis is probably Kafka’s most-famous and iconic short work and beautifully written. Translations of the original German vary—some being less specific than “cockroach.” But it’s unlikely that anyone who has read the story of a young man who overnights turns into a giant bug—much to the consternation and other strongly negative emotions of his mother, father, and sister, in an already claustrophobic household–will forget it or him.

In the end it is clear that for the family to go on “normally,” Gregor must die.

As Gregor, Ari Jacobson eerily resembles a young Kafka. He has an amazing human pretzel-like agility to approximate an insect, with no help from a costume or other device. His angst both before the transformation, when he is stressed by the need to support his family through back-breaking work, and after is palpable.

Lily Kerrigan, as his sister, Greta, is the member of the Samsa family who feels the most ambivalently toward the insect who has taken over her beloved brother. She conveys it well.

As Mr. Samsa, tall David Millstone is a compelling presence. we feel the conflict between him and Gregor. His voice, at times, though, overwhelms.

Pamela Bierly Jusino, as Mrs. Samsa, has the most hand-wringing to do as a woman disgusted by her own child, yet sensing she should love him. Her emotions seem less authentic than they might.

Early in his career, English actor/director Steven Berkoff adapted a number of Kafka’s works into plays. This Metamorphosis is one of them. Susan Galbraith, the Alliance’s artistic director, further adapted Berkoff’s work as music-theatre.

The dark side of Metamorphosis comes to life, with the help of the brooding lighting design of Brian Allard, the evocative sound design of Neil McFadden, and the music—based on traditional Jewish melodies—of contributing composer Hugh Livingston. The minimalist set by set and projections designer Joey Wade, with a platform, barstools, and wiring, intensifies the claustrophobia.

The projected animation by Janet Antich, in part based on the drawings of Kafka himself, add a whimsical note. Perhaps the most memorable is the comical creation of three would-be lodgers the Samsas need to compensate for the loss of Gregor’s income post-insect.

Yet for all that, there is very little humor. Whether it is just difficult to translate Kafka’s irony on stage, or it’s the conception of the production is hard to say. In fact, the highly physical performances—reminiscent of silent-movie acting—should provide humor, but don’t. That’s probably the biggest disappointment in a production that tries but misses a little.

Another is that there aren’t enough songs to really make this a musical, and one wonders to what effect there were added.

Yvonne Caruthers, a cellist and longtime performer with the National Symphony Orchestra, elicits a rich and haunting sound from the incidental music.

There are also some odd costume choices. If this is an Orthodox Jewish family, the mother would probably have covered her head and not worn a see-through skirt, and the daughter would not have worn a scarf. But then, the script doesn’t explain why a family that not only lights Sabbath candles but also sings a traditional Sabbath prayer observes Christmas.

Metamorphosis is part of the Alliance for New Music-Theatre’s 2014-2015 season, themed “The Outsider’s Outsider.” Kafka and his family were German-speaking Jews living in Czech-speaking Prague—heightening the writer’s sense of alienation. Kafka was also prophetic: his giant insect heralded a time, especially during the Holocaust, when unwanted races were seen as “vermin.”

Advisory: The play has no bad language, sexuality, or serious violence—Gregor and Mr. Samsa do scuffle—but parents may consider whether Metamorphosis is for children under 14 because the lack of humor makes events gloomier than they might be.

Running Time: Approximately an hour and 35 minutes. No intermission.

Metamorphosis plays through September 21, 2014, in Downstairs at the Woolly Mammoth Theatre, 641 D Street NW, Washington, DC. For tickets call 202-393-3939 or purchase them online.