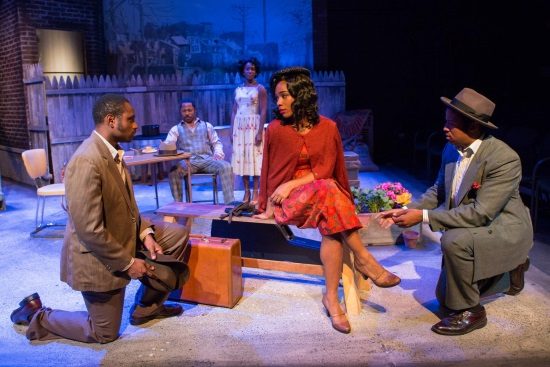 The cast of Seven Guitars. Photo by Teresa Wood.

August Wilson’s legend runs eternally deep through his cycle of 10 plays, chronicling the African-American cultural experience each set in a different decade of the 20th century.  Seven Guitars is a firmly rooted Wilson play currently performing at Signature Theatre’s Ark in Shirlington, produced by No Rules Theatre Company.

Michele Shay’s ability to conceptualize Wilson’s universal language of love, shared dreams, spirituality and the blues projected powerfully by a strong and spirited cast is in some ways unprecedented.

As in any Wilson production, Seven Guitars is heavily invested in the spirit of rhythm and blues through a rich lyrical presentation highlighting recurring themes of oppression, civil rights and movement, the will power of strength through spirituality, and the exploration of music and song.  Wilson’s story centers around Floyd “Schoolboy” Barton (Ro Boddie), with a mission of journeying to Chicago in order to produce a record after the making of a practically overnight success, “It’s All Right.”  Boddie owns the role of Floyd as he dynamically portrays a passionate man in pursuit of winning back his girlfriend Vera’s love in attempt to prove his fidelity to her after his release from prison.

Throughout the production, Boddie and the entire cast nail the rhythmic musicality of Wilson’s poetic, free-flowing writing.  If anyone can draw out this dedicated musical precision from the entire cast beautifully, it’s music director, Darius Smith.

During the course of the play, there are some wonderfully intuitive innuendos that accentuate the chemistry among Ruby, (Alexis Cash), Louise, (Bonita Brisker), and Vera, (Joniece Abbott-Pratt).  It’s interesting to see how contrasting the underlying tones are between Louise’s strong feminist ways and Ruby’s sleek, seductive nature and how their characters blend in smoothly as they establish their mark within their world together.

Praise for No Rules’ artistic director, Joshua Morgan for having veteran performer and director Michele Shay in directing such a huge undertaking.  Shay’s extensive background knowledge of August Wilson’s work is clearly evident within the embodiment of this production.  Nominated for a Tony Award in her performance as “Louise” in the original Broadway production of Seven Guitars, Shay has also appeared in many on and off-Broadway productions, including television, film, and regional theatre work across the country.

Seven Guitars with No Rules Theatre Company is a must-see.  Michele Shay’s ability to conceptualize Wilson’s universal language of love, shared dreams, spirituality and the blues projected powerfully by a strong and spirited cast is in some ways unprecedented.