Theatre Review: ‘The Cole Porter Project: It’s Alright with Me’ presented by the In Series at Source Theatre 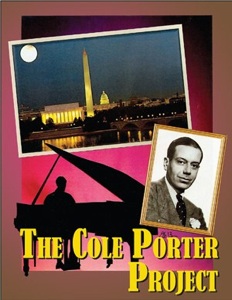 Have you ever wondered what would happen if Congress made musical theatre lovers happy for a change and signed a bill saying that once a year would be known as a day for commemorating composer/lyricist Cole Porter? The In Series is making a case for this with a remount of their earlier hit production called The Cole Porter Project: It’s Alright with Me.

Book writers Steven Scott Mazzola and Greg Stevens have taken 35 songs from the Cole Porter Songbook (mostly the familiar ones) and have created the following synopsis to tie the songs together.

Patrick (Christopher Harris) and his former student Samantha (Sarah Anne Sillers) have come to DC to convince lobbyist Courtney (Randa Rouweyha) that there should be an annual day dedicated to Cole Porter. Patrick and Courtney you could say have an obsession with this. As social media coordinator for Patrick, Courtney is tied to her phone and can blurt out facts about Porter faster than you can sing a chorus of “Friendship.” Courtney is skeptical that Congress will go for such a thing and suggests they hook up with Chris (Samuel Keeler) who works at the Library of Congress. It’s a good match as Chris is a big fan of Porter’s songs as well.

…it will leave you saying to Cole Porter “You’re the Top.”

Did I mention that Patrick is engaged to Nicole (Tammy Roberts) and they live in Cole Porter’s birthplace of Peru Indiana? Well, they do and Nicole is getting a bit perturbed that Patrick is more interested in Cole Porter than planning his own wedding. After a senator (Kenneth Darby) and congressman (Brian Shaw) bury the bill in a way that only Congress can, Patrick comes up with a way get people interested in it again. He proposes that Courtney host a fundraiser that will have some big name talent attached to it. Of course, the big names never materialize and Patrick, Samantha, Chris, Nicole (flew in from Peru) and Courtney become the entertainment.

Performance wise there are a few standouts. Jase Parker’s “Too Darn Hot” is a welcome feature with Parker’s jazz infused vocals. He also has a nifty feature as a chauffeur in “Miss Otis Regrets.”

Sarah Anne Sillers vocals on “Find Me a Primitive Man” are full of energy and spunk and her “Let’s Misbehave” duet with Chris Keeler is another musical highlight.

Christopher Harris has the most to sing and delivers every time. Songs like C’est Magnifique, “Don’t Fence Me In” and a great duet with Tammy Roberts of a lesser known Porter song called “From Alpha to Omega” give Harris a good range of Porter’s material to perform with class and polish.

A big shout out to Chris Keeler for his performance of “I’m a Gigolo” and the quieter “I Am in Love.” When a performer shows you both the brash and softer sides, it’s always a good thing.

Randa Rouweyha, while having a lovely operatic soprano voice, is out of her element in this show. Her voice is only suited to the torch songs like “Night and Day” and “Love for Sale.” When she gets to up tempo numbers like “Experiment” and “I’m Throwing a Ball Tonight”, it comes off as stiff and a bit uncomfortable as does her acting.

With Alex Tang on piano and Ephriam Wolfolk on bass, the accompaniments backed the singers perfectly rather than overpowering them.

The book by Mazzola and Stevens has plenty of topical references to DC life such as how bad the Metro is and jokes about Congress. The script is quite campy and that is precisely its problem. Porter’s songs have a high society feel to them, despite the double entendres, so the script is working against most of the songs.

Stevens directs the show at a good pace and Angelisa Gillyard’s choreography while simple, does what it needs to do.

Just because I am a musical theatre geek, I would have preferred a few more of the lesser known songs from Porter’s repertoire. A song he wrote for a TV version of Aladdin which was his final score called “No Wonder Taxes are High” would have fit beautifully with the political undertone of the script. He wrote close to 1,000 songs so presenting, for the most part, his greatest hits doesn’t give full representation of Porter’s full body of work.

Overall, The Cole Porter Project: It’s Alright with Me is a mixed bag. Porter’s songs are always good and there are some good performances. It might not be an “Ace in the Hole” but it will leave you saying to Cole Porter “You’re the Top.”

Running Time: One Hour and 55 minutes with one intermission.

The Cole Porter Project: It’s Alright with Me runs through September 21, 2014 at Source Theatre which is located at 1835 14th St NW, Washington, DC. The show is playing in rep with Fatal Song:The Great Opera Murders. For tickets click here.