Theatre Review: ‘The Devil in His Own Words’ by Taffety Punk Theatre Company at Capitol Hill Arts Workshop 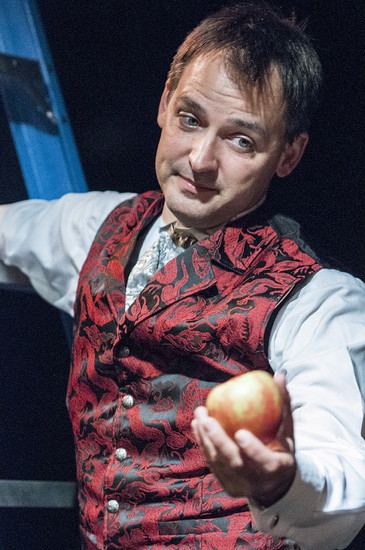 Boom! opens Taffety Punk’s anniversary production of The Devil in His Own Words. And out walks the powerfully casual Devil (Marcus Kyd) in Dickensian garb. Both the playwright and the star of this erudite work, Kyd is impeccable as the Devil—an unpretentious friend and confidante who moves about the stage made of equal parts good humor and lonesome agony.

The Devil in His Own Words is a one-man feat in which the Devil—sometimes with tail and horns, others without—examines his own eternal existence. He travels the world encouraging sinners to sign his Faustian contracts, confiding in a paper doll playing the Biblical murderer Cain, and relating the story of his place in the world. The Devil acts as a wordy but engaging character study of God’s most hated but most faithful servant. Who is the Devil? Where did he come from? How does he operate? Why is he here? Is he human, or more than? And most importantly, what can he teach us about ourselves?

The Devil’s erudite script is an impressive work. It quotes directly from over 30 sources in literature, including text from Ben Jonson, Charles Dickens, Mark Twain, C.S. Lewis and some biblical apocrypha. And Kyd’s loose, unpretentious style does not disappoint, even when he’s speaking to a paper bag dressed up as God or acting as a modern stand-up comedian.

Taffety Punk, the local theatre company with the heart of a punk rock band, mounted The Devil In His Own Words ten years ago, marking the debut of the company with a three-actor performance. Since then The Devil has been revised, distilled, and reduced into its current single-actor form. The audience whooped as the Devil joked with them, cowered when he cried out in agony, and seemed to empathize when he tempts Jesus in the desert—and is ultimately rejected.

One of the original actors and a well-known force in her own right, director Lise Bruneau creates a full scene with only a few props in Capitol Hill Arts Workshop’s small black box space: a ladder here, a curtain there, two mannequins, and an apple. Yet Kyd’s natural energy and nuanced performance as the aloof, bored, exasperated, lonely, rejected, and self-deprecating Devil fills up the minimal space.

Wonderfully verbose and darkly engaging, The Devil in His Own Words is an artistic achievement…

A charming and moderately irreverent experience, much of The Devil’s sense of humor and drama emanates from Kathy Cashel’s music and sound direction. An institution in the DC area’s rock and theatre scenes, Cashel’s artistic voice punctuates the piece, multiplying Kyd’s voice into terrifying climaxes, creating musical accompaniments to his dealings with minor demons and mortals, and echoing his despair.

Wonderfully verbose and darkly engaging, The Devil in His Own Words is an artistic achievement somewhat like adding chocolate chips to your grape nuts. It’s an entertaining approach to the plethora of spiritual and intellectual questions it raises—one certainly worth the ticket price.