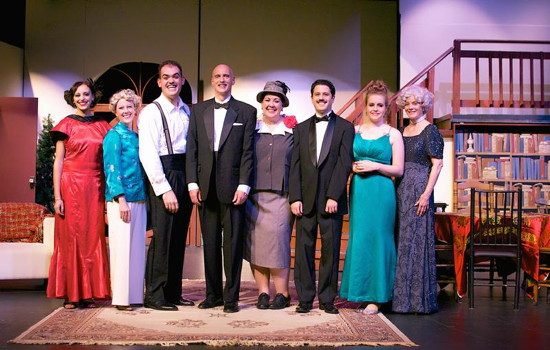 The cast of ‘The Game’s Afoot.’ Photo by Toby Chieffo-Reidway/Irish Eyes Photography by Toby.

Farctery? Mystearce? Hmmm. As you can see, even for the reviewer, the blending of the theatrical genres of mystery and farce can be an imposing, if not tongue-twisting challenge. Heighten the suspense with preposterous characters? Put a purpose behind the lunacy?

…a fine evening of outrageousness…

The McLean Community Players are quite game and give it a rousing go at it in The Game’s Afoot or Holmes for the Holidays.

Best known for the comedy Moon Over Buffalo and his wonderfully crafted masterwork Lend Me a Tenor, playwright Ken Ludwig reaches back to a period piece and channels our great fictional sleuth, Sherlock Holmes. Here in America in the 1930s, an actual actor—one William Gillette—made a living recreating Arthur Conan Doyle’s detective onstage.  We see Gillette (Frank Gorrell) and his travelling cast burst onstage as they perform the last of their show, in a play within a play setting. A shot rings out, Gillette is wounded, and the mystery is set in motion.

As Gillette recovers, he decides to invite the members of his cast for Christmas to his fancy Connecticut mansion, all with the aim of finding out who pulled the trigger. Ah, Sherlock in full. In a murder mystery dinner setting, we meet Felix Geisel (Stephen T. Wheeler) and spunky wife Madge (Melissa Dunlap), longtime friends and thespians to the core, yet a bit of a rivalry between Felix and Gillette, even as they break out in Shakespearean quotes at a moment’s notice. Newlyweds Simon (Michael Schwartz) and Aggie (Carolyn Schaumberg) arrive in awe of their surroundings.  Schwartz plays a cloying nervous young man while Schaumberg effectively plays the ingénue with a few secrets. Gillette’s mom (Kathryn Johnson) is a dottie addition to the mix.

Things take a decidedly different tone when Gillette announces that he has asked one more guest to the party –the one and only Daria Chase (Dina Soltan), a gossipy theater critic who has not been kind to the actors in the company.

“She said I played Hamlet’s mother looking like a worried hamster,” Madge intones.

“I was in a play last year and appeared in a bathing suit,” Simon said. “She wrote: ‘Simon Bright’s audacity in the role was largely in excess of his equipment.’ ”

Soltan’s Daria is a fittingly over the top haughty cat with claws who skewers everyone in the room. Alas, she doesn’t have much of a shelf life in this show, but who offed her? The same person that shot at Gillette?

Twists and turns continue, especially fine physical work with Geisel and Gillette trying to hide the body before a certain Inspector Goring (Elizabeth Replogle), in a nod to Agatha Christie sleuths, looks into the proceedings.

The set design has nice lighting aspects and the deep stage gives a better feel for the grand estate. Director Bob Sams balances many media aspects of the show well. Opening night had a few glitches, and I would have liked to have seen more crispness in several scenes and even more character extremes. But many fine moments are on display. Gorrell’s Gillette is at times frenetic and composed, and delivers much derring-do.  His scenes with Wheeler were very natural.

In this regional premiere, MCP offers up a fine evening of outrageousness through challenging motifs. Nothing here is ‘elementary.’