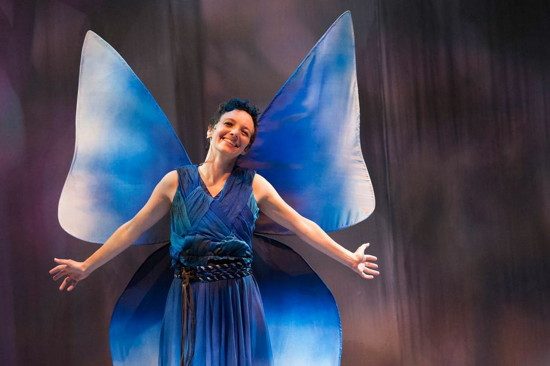 Imagination Stage opens their new season with The Night Fairy, based on a book by Newbery award winner Laura Amy Schilitz, adapted by John Glore and directed by Jeremy Skidmore. Schilitz’s story is brought to exciting, colorful life as the audience is plunked into a miniature world that is full of adventures. Here, friendships are built, and the importance of appreciation is realized.

Flory is a young fairy who loves the night and to fly on the night wind. She rarely sees the light of day, and she has never felt the need to have any friends. She loses her wings one evening after colliding with a bat and finds herself trapped on the ground and unable to fly. Flory soon discovers how small she really is in this new world of ground-and day-living, and she realizes that she will need all of her strength, bravery and intelligence to survive. But also she will need a little help from friends.

Imagination Stage’s Flory, played with all earnestness by Tia Shearer, is dressed in a midnight blue accented billowy dress and slightly clunky black boots. She is far from a fluffy pink fairy, and that aesthetic fits the story perfectly. Flory’s first encounter is with a small red wren (Megan Graves) who cannot help Flory find her wings because she is busy packing her house for her flight south with her flock. Wren flies away, and Flory moves into her house, even though Wren asked her not to live in her house while she was gone.

Flory next meets Skuggle the squirrel, played by a very funny and overall audience-pleasing Erin Weaver. Weaver’s Skuggle exhibits everything I think a squirrel would do and say, if I ever could talk to one. Weaver is hyper, but not focused, and the sounds she makes when Skuggle gets very excited are genius! Flory’s and Skuggle’s friendship firsts consists of Flory feeding Skuggle for every favor Flory asks, and Flory’s favorite favor is to ride on Skuggle’s back to go where the humming birds are and to watch one certain humming bird flap her wings.

When that humming bird gets trapped in a Spider’s web, Flory realizes she wants to save Humming Bird, and not just to satisfy Flory’s own needs. She wants to be a friend and help Humming Bird live, because Humming Bird has eggs that are about to hatch. Spider soon comes to collect her snack. Alyssa Wilmoth Keegan plays Spider, and she uses ballet and toe shoes to display the movements of a spider dancing on a web. The effect is mesmerizing. Megan Graves also plays Humming Bird, and her distress and sadness at being stuck in a web and not able to make it back to her eggs is poignant.

Flory finally faces Peregrine, the bat who took Flory’s wings, and Ryan Sellers’ portrayal of Peregrine is superb. The bat fights with Flory in an amazing scene of karate moves that made his movements seems like a bat whirling around in flight between the ground attacks on Flory.

In the end, Flory faces her fears, and when she does, amazing things begin to happen.

Running Time: 90 minutes including one intermission.