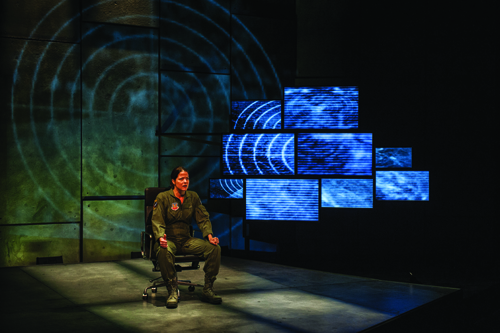 Megan Anderson as The Pilot. Photo by ClintonBPhotography.

Resident company member Megan Anderson is celebrating an important milestone in a big way. In her 25th production with the Everyman, Anderson gives a tour-de-force performance in a one-woman show that highlights her mighty talent. The award-winning Grounded, written by George Brant, first premiered in London to sold-out audiences and is making its Baltimore debut.

Anderson plays The Pilot, a female fighter pilot who has become a top gun in a still-predominantly male world. She loves her job. She calls her F-16 “Tiger” and bliss is flying missions over Iraq.

A sexual encounter with a young man she meets in a bar results in an unexpected pregnancy – and marriage. She is “grounded” and it changes the course of her life and career forever. Though her tough exterior falls away as she finds love with her husband and baby girl, she misses the flying and being up there in the “blue.”

…Anderson gives a tour-de-force performance in a one-woman show that highlights her mighty talent.

The Pilot returns to active duty only to find that she has been assigned to what is sarcastically called the “Chair Force” – the Bermuda Triangle of the Air Force. She now sits in an air-conditioned trailer at a base outside of Las Vegas flying drones 8,000 miles away over another war zone in the Middle East. She stares at a gray computer screen 12 hours a day, seven days a week, looking for targets to bomb and then drives home to be a wife and mommy. This is a surreal way to live and the stress of the job begins to take its a toll.

With the increased use of drones in war as well as everyday life and the stress on our military, this play highlights some of the most relevant issues that face our modern world. Though Brant’s tale touches on the ethics of drone warfare and what it means to be a woman in the military, the deeper story is the impact on a psyche of a pilot who must cope with the detached, dehumanizing nature of this new technology while trying to maintain a balanced life.

The director, a good friend of the playwright, has done a beautiful job with Anderson, whose presence fills the stark stage. Dressed only in the flight suit that gives the character her identity, she struts and swaggers. The Pilot speaks in language that is blunt and sometime crude – like one of the guys. But when she is touched by the love of a man and a child, her softness and fragility come to the surface.

The design team – set designer Lucinana Stecconi, lighting designer Harold F. Burgess II, sound designer Eric Shimelonis, and projection designer Jared Mezzocchi – manages to evoke both the feeling of big spaces and the claustrophobic trailer that is now the Pilot’s “battlefield.” Anderson’s only prop/furniture is an office chair. On either side of the set are banks of flat computer screens. The back wall is constructed of flat grey sections. The screens and back wall are used to project the static of a computer screen and the grey, fuzzy images from the drone that we have all seen on the news – or a rare glimpse of a blue sky.

Megan Anderson keeps you captivated for 75 minutes as the character rides a roller coaster of human emotion. This actress is a precious asset to the Baltimore theater scene and we are looking forward to her next 25 productions.