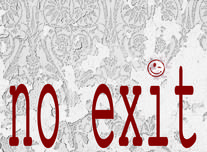 at The Highwood Theatre in Downtown Silver Spring

Your Theatre, a division of The Highwood Theatre, presents the existential classic No Exit by Jean­Paul Sartre, adapted from the original French by Paul Bowles and directed by Rachael Murray. This dark comedy examines the serious concepts of hell, identity and human interaction through a humorous lens.

No Exit follows three individuals, an unfaithful husband, a lesbian postal clerk, and a high­class murderess, as they arrive in Hell and must accept their fate: coexisting for eternity. Murray and her cast take a fresh look at Sarte’s claim, “Hell is just other people,” as they boldly explore the interactions between the characters and the power they hold over one another.

About The Highwood Theatre

The Highwood Theatre is a non­profit organization dedicated to bringing the community together through theatre. Now in its 12th Season, Highwood’s guiding principle is “anyone can do theatre.” Highwood was founded in 2004 and began executing its mission through seasons of professional­ quality theatre featuring all ­student casts, design teams, and production staff. In 2013, in conjunction with its relocation to the heart of downtown Silver Spring, The Highwood Theatre expanded to more fully carry out its mission and develop innovative, engaging programming for artists of all ages through professional and student productions, classes, and programs in schools and for home schooled students.

The Highwood Theatre is creating a theatre hub in downtown Silver Spring made up of artists of all ages, regardless of past experience or training. Through productions and programs that combine both professional theatre artists and students ­ along with opportunities for development and training in all aspects of theatre ­ we hope to bring the community together and foster an environment where everyone feels comfortable, supported, and inspired to collaborate, share, appreciate, and create. For more information, go to www.thehighwoodtheatre.org.

No Exit is part of Highwood’s 2014­-2015 Mainstage Season and is the season’s first production by its Your Theatre division, which is dedicated to producing high­ quality professional theatre productions with mixed casts of talented adult and student actors.

Directions to The Highwood Theatre in Silver Spring

No Exit, by Jean­Paul Sartre, a Your Theatre production of the Highwood Theatre located in downtown Silver Spring. Performances are at 7:30 pm on Thursday, October 30th; Saturday, November 1st; Friday, November 7th and Saturday November 8th. Matinee performances are at 2:00 pm on Sundays, November 2nd and 9th. Tickets are $25, $20 for those under 25, and are on sale now. Visit www.thehighwoodtheatre.org for more information.