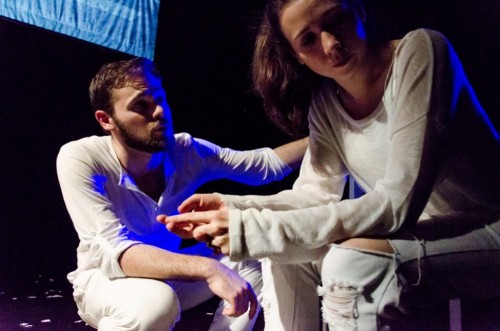 In keeping with the Iron Crow Theatre Company’s tradition of staging unconventional, thought-provoking, often dark dramas, the kick-off to their three-play 2014-2015 Season did not disappoint. You know you’re in for a signature Iron Crow theatrical experience when before the play begins the audience observes a body dressed in white, highlighted by occasional red lighting, lying prone on the otherwise darkened Baltimore Theatre Project stage with some gloomy New Age music droning in the background prior to its presentation of 4.48 Psychosis.

Though Iron Crow bills itself as Baltimore’s queer theatre company, 4.48 Psychosis by British playwright Sarah Kane stepped aside from past Iron Crow plays that usually have LGBTQ themes woven into the scripts.  Research reveals, however, that Kane had affairs with women, so this presentation does have an LGBTQ connection even if the subject matter was mostly devoid of it.

In fact, 4.48 Psychosis doesn’t even have a plot, structure, timeline or staging directions.  Iron Crow’s artistic director Steven J. Satta attests to that fact in a press release announcing the season: “The play is written in a manner, which is not realistic or linear but rather abstract and disjointed, which is appropriate when dealing with issues of mental health—the rational does not apply.”

Indeed, 4.48 Psychosis, which opened in Britain’s Royal Court Theatre in 2000, touches upon such issues as depression, suicide, self-harm, religion, medications, the mental health care system, relationships and love—all packed within the confines of a one-hour play.  It was the last work written by Kane who committed suicide a year and half before the first performance by hanging herself using shoestrings in a British hospital.

Kane was suffering from clinical depression before her suicide, which led to a prevailing assumption that 4.48 Psychosis is an autobiographical suicide note whereby she reveals in ethereal and at times, incoherent ways the mental chaos of contemplating suicide that was afflicting her prior to her final fatal act.  Others disagree based on some of the lines in the play that could be interpreted as optimism.  The final line in the play, “Please open the curtains,” is one such indication.

In 4.48 Psychosis, Kane doesn’t identify who or how many characters are involved or what the characters’ genders, age or race are.  Without such guidance, the interpretation of this play remains in the hands and creativity of the producers and directors.  And it allows the audience to fill in the blanks and shape the story in their own way.

Director Ryan Clark, who also designed the sound elements, took advantage of this artistic latitude and superbly guided a skilled Iron Crow ensemble and crew with proficiency and imagination. Three excellent actors—Nick Horan who turned in an admirable performance in Iron Crow’s The Homo Poe Show in March, Katie Keddell and Ché Lyons —efficiently rotated in and out of the roles of the doctor, the patient and the bystander.  Or were they all different dimensions of a singular mentally ill person?  Or…?

These actors, all attired in plain white outfits, performed their multiple roles convincingly aided by their striking movements on the stage; their well-delivered soliloquies and dialogues that included a naturalistic, abstract or poetic language forms; and facial expressions frequently contorting to convey the anguish the characters are experiencing.

The performances were enhanced by a creative though spartan set that depicted the inner workings of the mind itself. Two four foot-wide curtains on either side of the stage and a wider one above the rear of the stage served as screens for a series of projections that appears to be at times a corridor in a hospital when the doctor and patient scenes take place and abstract bubbly images floating up and down the curtains during other moments when inner thoughts are revealed.

The actors employ only a few props during the presentation but are effective: three chairs that are moved about throughout the play and to signify changes in the scenes and a rope to denote the tensions created by pushing and pulling of the characters’ mindsets.

4.48 Psychosis like other Iron Crow productions is not a feel-good encounter if one only evaluates the play on a single level.  But it is a solidly creative theatrical experience given the potent performances and clever atmospherics.

Running time: approximately one hour with no intermission.

Advisory: This play contains profanity and is not suitable for children.