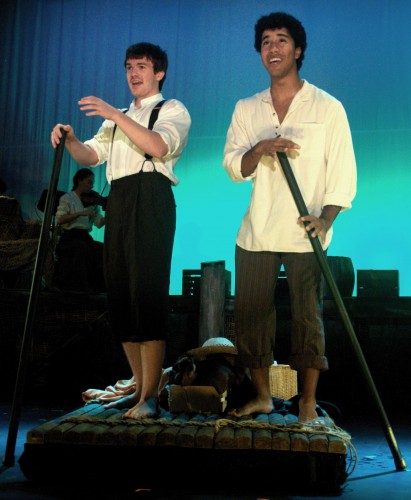 Huckleberry Finn (Brian Nabors) and Jim (Alex Peças) pole their raft down the Mississippi River while singing about the “Muddy Water.” Photo provided by Silhouette Stages.

When Big River opened on Broadway in 1985, it was a welcomed triumph for the American musical theatre. In a decade where British imports like Les Miserables (first English translation), Cats and The Phantom of The Opera were dominating the Broadway boards, Big River was a rare American success.

Hiring songwriter Roger Miller (“King of The Road”) to write songs for a musical version of “Huckleberry Finn” was pure genius. (And in fact, the only surprise was that no one had thought to ask him sooner). Although he had no experience in musical theatre, Miller ended up winning a Tony for what would be his one and only Broadway score. It’s a catchy collection of terrific songs written in a variety of musical styles, including country and gospel. The original cast featured a young, unknown John Goodman as Huck’s dad (a surprisingly good singer, as heard on the show’s original cast album).

With Roger Miller’s terrific songs, a spirited cast and can’t-miss source material, Big River is well worth checking out.

Big River is a faithful (if understandably abridged) take on Mark Twain’s famous novel. You probably remember the story from having read the book in high school. Huck is a free spirited 13 year old who has grown tired of “society” and its unrelenting attempts to “civilize” him. He decides to fake his own death and run away. He teams up with an escaped slave named Jim, and the two take a raft down the mighty Mississippi, hoping the big river will transport them both to a new life of lasting freedom.

The novel has been called many things: A “road trip” (or “river trip,” in this case), an adventure story, a satire, and the greatest American novel ever written. It’s all of these, of course, and more. At the heart of the story, Twain depicted the evils of slavery and the deep humanity of Jim, a black slave caught in its clutches. And in so doing, Twain elevated his fun and funny adventure story into a profound examination of pre-civil war America, and of man’s capacity for prejudice and evil.

Silhouette Stages production of Big River opened on Friday night, and the material is well served by this superb cast. They all give themselves over fully to the material, and they work well as a team. The first act does begin to drag a little towards the end. But in the second act, when Huck and his friends arrive in Arkansas, the scope of the story expands considerably and the energy increases. Director Steven Fleming skillfully succeeds in keeping the pace up and the performances sharp. Despite a somewhat long running time, the show ultimately engages throughout. The five-person band (visible onstage) led by Keith Tittermary expertly sells Miller’s wonderful tunes and keep our toes tapping.

Brian Nabors ably anchors the story as Huck. The actor possesses both a confident stage presence and a truly powerful singing voice, particularly in the ballad numbers. He’s a musical theatre natural with a long career ahead of him. Nabors does seem a little old to be playing Twain’s adolescent anti-hero. And as such, Huck’s transition towards emotional maturity (mostly filtered through the prism of his relationship with Jim) doesn’t impact as powerfully as it might. As Jim, Alex Pecas vests his character with strength, common sense and sensitivity. He truly captures the man’s yearning, hopeful spirit.

Among the supporting players, Jesse Kinstler is the true standout as Tom Sawyer. (It doesn’t hurt that the boy looks like he was lifted straight out of a Norman Rockwell illustration of the character). His performance was fully realized and brimming with boyish charm. Whenever he’s on stage, one can’t help but wonder what Kinstler might have done with the Huck Finn role.

John W. Nupp (The Duke) and Jeremy Goldman (The King) make for a wonderful Mutt and Jeff pair, hilariously cooking up schemes with unapologetic dishonesty. They bring Twain’s cynical satire to vivid life. Company members Zachary Roth and Stephen Dransfield make the most of their limited stage time and invest their small town characters with real personality. And Scott Bittner sells his one solo song (“Arkansas”) with an unbridled enthusiasm that would make Bill Clinton proud.

Twain’s novel is overwhelmingly male-oriented, and Big River, ever faithful to its source material, doesn’t offer many opportunities for its female cast members. But among them, Clare Kneebone stands out as both Miss Watson and Mary Jane Wilkes. She scores with her sardonic take of “You Ought To Be Here With Me.” Denise Glass makes for an appropriately disapproving Widow Douglas. And Sandy Howard Cromwell rendered her singing duties with true heart and earnest technique.

Director Fleming doubled as set designer, and his unit set, augment with cubes, benches (and at one point, actors) helped to create a strong sense of place while not hindering the overall pace. Choreographer Jennifer Frederick injects the dance scenes with energy and regional flavor. “We Are The Boys” and “The Royal Nonesuch” are just two of the highlights. Costumes by Gabriela Castillo nicely evoke the time and place (and looked appropriately “lived in”).

One final note: The production does use a particular racial slur about nine or ten times during the course of the performance. This is consistent with both Mark Twain’s original novel and the times he was writing about. (The program includes a sensitively written essay by the director, addressing this issue.) In this reviewer’s opinion, the play ultimately locates a successful balance, including the word enough times to evoke a realistic depiction of the setting while not overdoing it.

Nevertheless, some audiences may choose to stay away for this reason. Those who do so will miss out on a wonderful night of theatre. With Roger Miller’s terrific songs, a spirited cast and can’t-miss source material, Big River is well worth checking out.

Advisory:  Suitable for all ages.  (See review regarding language.)