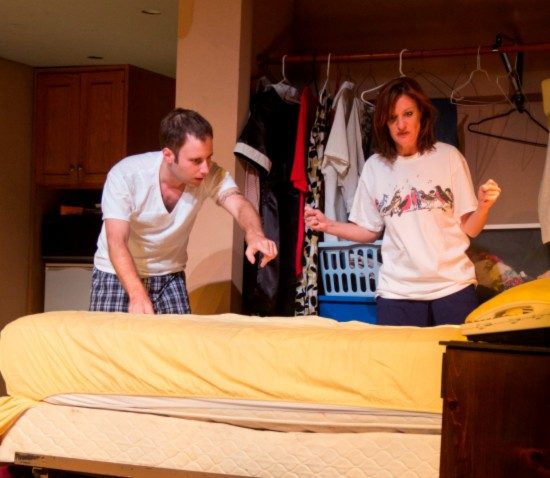 Tracy Letts is a pioneer of “in-yer-face theater,” a genre best known for its nitty-gritty realism. Actors get naked, smoke, drink and use drugs on stage and employ exceptionally strong language to shock and engage their audience. Not exactly what comes to mind when you think community theater, is it? And sitting with my husband in the front row of a middle school arts center waiting for Bug by Tracy Letts to begin, all I can think is that this is a brave choice for a community theater company. I am already impressed and engaged.

Bug is the story of Agnes White (Jo Sullivan), a domestic abuse victim, drug addict and cocktail waitress. The entire play is bottled within her home, a seedy motel room outside Oklahoma City where she in hiding from her paroled ex-husband, Jerry Gross (Mike Fox). Her best friend R.C. (Elizabeth Hansen), a lesbian biker chick who is navigating her own complex domestic situation, is also her drug dealer.

One night during a “party” in Agnes’ room, R.C. introduces Agnes to Peter Evans (Mike Rudden), a man she herself only barely knows. An AWOL Gulf War veteran convinced that the government has been experimenting on him for the last four years in an army hospital, Peter is fixated by minuscule bugs that only he can see. Very quickly a romance between Agnes and Peter is born of mutual loneliness. They desperately cling to each other; sharing their various deep dark secrets, neuroses and paranoid delusions. Set over the course of a week, Bug speeds with startlingly rapidity towards its bloody climax.

In a production chock-a-block with complex characters, Agnes and Peter are exceptional. Sullivan brings candid realism, physicality and raw emotion to the character of Agnes, all the while sporting an impeccable Oklahoma accent. Her familiarity with Letts’ body of work and her self-described “un-planned midlife crisis” have resulted in a distinctly genuine and very personal exploration of Agnes.

Rudden develops the character of Peter with the mathematical precision of a math teacher (which he is!). Meek, obsessive and antisocial, Rudden’s Peter seems “off” from the beginning. As Peter’s delusions progress in severity, Rudden transitions swiftly from a quirky neurotic into a paranoid, disturbingly violent man. Completely convincing in his role, Rudden may trick you into momentarily accepting Peter’s delusions as reality.

Ultimately, the best part about this challenging and slick production is that the cast and crew are making a concerted effort to engage their audience and effectively communicate the importance and cultural relevance of the issues raised throughout Bug. Admittedly and satisfyingly gruesome in its conclusion, Bug is a no-frills probe into the extent of human vulnerability, isolation, addiction, paranoia, mental illness, desperation and domestic violence.