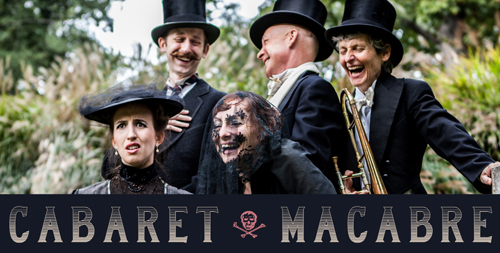 The cast of Cabaret Macabre. Photo by Leslie McConnaughey.

Happenstance Theatre returns to the Theatre Project with the fifth iteration of its popular and 2013’s Helen Hayes Award-nominated production of Cabaret Macabre. Following its delightful Impossible! A Happenstance Circus this past May, Baltimore is again in for a treat just in time for the Halloween season.

This clever and cohesive company is headed by co-artistic directors, Mark Jaster and Sabrina Mandell, with Gwen Gastorf, Sarah Olmstead Thomas (recently seen in Center Stage’s magnificent production of Amadeus), Alex Vernon and musician/composer extraordinaire Karen Hansen. This talented group of actors combines the art of clowning, commedia dell’arte, dance, music, pantomime and wonderful sense of comic timing to create a multitude of memorable characters that will appeal to all ages.

This talented group of actors combines the art of clowning, commedia dell’arte, dance, music, pantomime and wonderful sense of comic timing to create a multitude of memorable characters that will appeal to all ages.

The late, great illustrator Edward Gorey’s skillful black-and-white, pen-and–ink drawings and dark humor based in the Victorian era graced many books (as well as the opening credits to PBS’ long-running Mystery series). His work is the inspiration for a series of seemingly unrelated vignettes with minimal dialogue. Yet there are threads that tie it all together – a dark story of romance and murder as two sisters vie for “The Spisby Suitor” (with an imaginative creation of wind by the actors) and then reunite in “A Séance.” An unflappable, deadpan housemaid appears throughout and gets satisfaction several times expressed with a sly, subtle grin. A croquet ball that mysteriously crosses the stage as the show opens will eventually be part of a wild croquet game. In a beautifully timed, slow motion feat of physical comedy, a snobby participant will get her comeuppance – more graceful and sophisticated than a “Three Stooges” episode and infinitely more funny. There is a wonderful music-and-dance interlude as the company performs “Dancing the Devil Away” – the men in tails and the women in spectacular, flapper-inspired, sequined dresses.

This time there is virtually no set. The simple, black box theatre is a perfect backdrop for the production. With a piano on one side and an old-fashioned pump organ on the other, Karen Hansen provides the music (and is sometimes joined by Mark Jaster playing the saw with a violin bow) and periodically interrupts the action with comic telegrams.

Using vaudeville-styled placards on a stand, the vignettes are introduced. The subtle lighting by Kris Thompson, amazing period props, and the awe-inspiring costumes designed with a seamless combination of vintage clothes and new material by Sabrina Mandell, bring the focus onto the hilariously funny (and sometimes poignant) performances of the troupe.

Mark Jester is a chameleon, sometimes utilizing no more than an arc of the eyebrow or throwing on a crazy, ill-fitting wig on top of his head. Sabrina Mandell, as well as the all the actors, inhabit their characters so beautifully that they could have walked out of a time machine.

The company will again take this show on the road to New Orleans. A great addition to this year’s Baltimore theater scene, I hope that Happenstance Theatre will come back again and again with its brilliant theatrical gems.