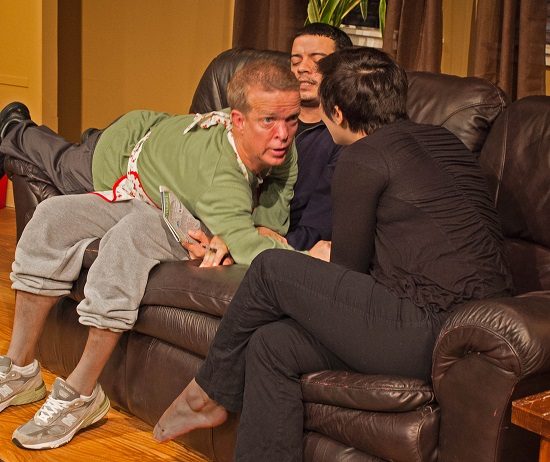 You’ll be rooting for the central character of Marc Goldsmith’s Danny Boy in the Unexpected Stage Company production at the Randolph Road Theatre in Silver Spring.

Not because he’s a little person. But because he’s so wracked with insecurity and shyness, in part caused by that condition of birth.

He hasn’t had a date in a while, is scared of asking out a woman he likes at work; his only friends are a kid he used to babysit in his building who has grown up to be an unemployed slacker, and woman who has been a friend since high school.

And his mom comes popping into his apartment, mostly at inopportune times.

Danny is on the verge of change, though. Because of a therapist, he fines himself a dollar every time he apologizes for something, which, it turns out, is quite a lot. He agrees to ask his co-worker on a date, and to his astonishment, she agrees.

However, at first she seems overtly interested in his four-foot-height and the prospects of his wearing  an Elf costume. Danny is in no position to deny her this, and he goes through the role playing.

He reaches a crisis though when he tries to decide where exactly he fits in.

Scott J. Strasbaugh is pretty likable in the lead role. He seems to inhabit the apartment set so well, it doesn’t seem so much that he’s short as it does Justus Hammond seem freakishly tall.

Still, Strasbaugh’s previous acting, from the film Zoolander to local stage and commercials, have likely relied more on physical work. His expressions and mannerisms — including a flying leap onto the couch from quite a distance away — are perfectly done. But he doesn’t seem to have had a lot of practice handling so many  lines. Still, tripping over a few of them on opening night could be attributed to his flustered character.

Especially when he told some confessional tales of being teased in the past, or his inability to connect or even identify with other short people, he was absolutely convincing.

But playwright Goldsmith isn’t quite sure what direction to take Danny Boy — a serious statement on little people in society or a gag-filled farce. At two hours, he’s got time to throw a lot of both styles in and some of the flimsy running gags, such as the apology jar, quickly run out of gas. A whole bit about Danny’s pal as a failed Santa’s helper could have been easily dropped altogether.

The cast helps keep things afloat, though with some high points especially from Dawn Thomas Reidy as his dynamic and alluring new girlfriend, and Lois Sanders-DeVincent as his droll and nagging mother. Briana Manente is good, too, as the platonic friend who, clear as a Hallmark movie, is meant to be his real soul mate from the start.

Zach Brewster-Geisz makes an impression in a small role as the girlfriend’s desperate jilted ex and Justus Hammond is a convincing cad who begins the play sat the audience filters in, playing video games, just as he had supposedly been doing all day.

As serviceable as Kristen Jepperson’s set is, the door doesn’t always stay shut and there seems to be an awful lot of fuss about bringing food and snacks in and taking them out. The biggest lapse is in sound, when a nagging beep in act one that sounds like trucks backing up makes you think the Randolph Road Theater might be too close the county garage until you realize the beeps are intended to represent New York traffic — a wholly unnecessary annoyance that doesn’t convey what it is supposed to.

With so many little people populating entertainment, in reality shows (Little People, Big World, The Little Couple, Little Women, Pit Boss) and in top TV shows (Game of Thrones, Life’s Too Short), a play about one isn’t quite the novelty it might have once been.

But as amusing as the cast helps make Danny Boy, and sensitive to the issue, the work would actually been more effective, ironically, if it too had been shorter.