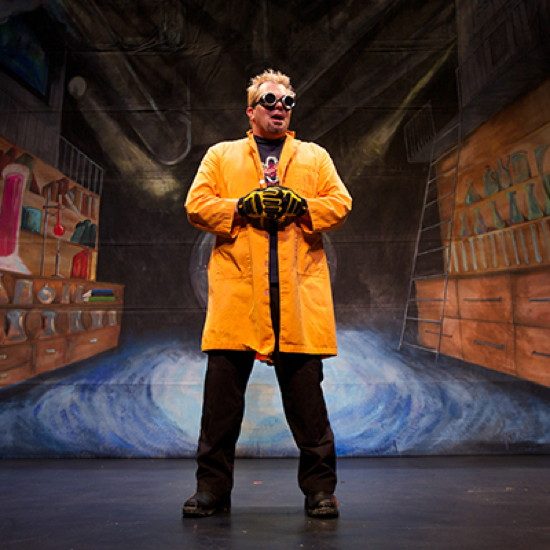 The John F. Kennedy Center for the Performing Arts, Young Audiences program presents Doktor Kaboom! LIVE WIRE! The Electricity Tour, written and performed by David Eplay as Doktor Kaboom, directed by Annie Lareau and Technical Assistant, John Jeckins. David Eplay chose to be an actor and a writer of comedy shows after he decided not to become an astrophysicist, a chemical engineer or a marine biologist. I am sure that children and their parents are very glad he chose the life of a writer and actor!

DoktorKaboom, a wacky German scientist, opens the electrifying show with a spectacular display of lightning shooting out of three large Tesla coils (an electrical ring circuit invented by Nikola Tesla around 1891, used to produce high-voltage,low-current, and high-frequency alternating-current electricity) are set on the stage. As the lightning grows, the dark stage brightens to reveal the outline of Doktor Kaboom. The popular 1980s song “Weird Science” by Oingo Boingo fills the theatre and he turns towards the audiences with the best “mad scientist” maniacal laugh and the audiences cheers. With his short white hair in spikes, steampunk goggles perched on his forehead, bright yellow lab coat and black work boots with red flames on each side, Doktor Kaboom is cool and so are his lessons about electricity, science, and the importance of self-confidence.

This interactive show involves a number of children volunteers from the audience, and Doktor requests yell backs. During one part of the show, Kaboom explains how particles with positive and negative charge work by bringing two young volunteers on stage and helping them put on “bubbles of safety” (large air bubbles forming a ball shape that go over the head to protect the body). The bubbled volunteers represent negatively charged and are unable to stick to each other when they collide. The young volunteers did their best to get the Velcro to stick by running from either side of the stage into each other but they just bounced off each other. They could only stick to Doktor Kaboom when he put his “bubbles of safety” on and was a positively charged electron. The roar of cheers and applause from the audience proves that Doktor Kaboom’s teaching methods are as entertaining as they are educational.

I suggest to all to hurry and get tickets for some electronic, hair-raising fun!

David Epley’s ability to adapt to the “never the same show twice” situations is amazing and very funny. His German accent is comically strong, and the audience hardily and happily complies with his request to yell back the German yes, Ja, after every demonstration.

There is only one more weekend left to see Doktor Kaboom at the Kennedy Center. I suggest to all to hurry and get tickets for some electronic, hair-raising fun!