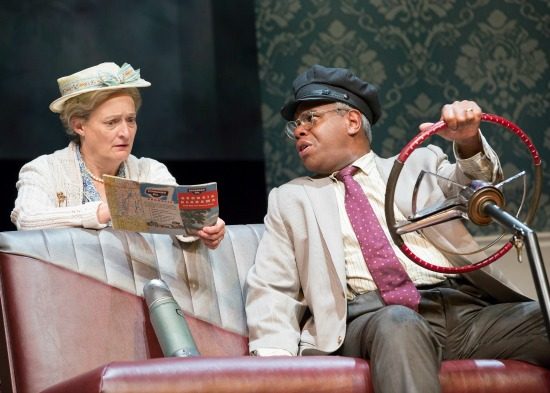 There are some plays that are perfectly suited for Washington’s historic Ford’s Theatre and Alfred Uhry’s “Driving Miss Daisy” is one of them. One imagines the spirit of Abraham Lincoln looking down approvingly as races learn to eventually get along in the form of a cranky Southern white woman and her African-American chauffeur.

Yet the play was never so much about race as it was about strong-willed older people who learn to recognize themselves in the other as the decades go on, a story that was set firmly in our minds by the Morgan Freeman/Jessica Tandy film a quarter century ago.

That’s what makes the task more substantial for Jennifer L. Nelson’s revival of the Pulitzer Prize-winning play that opened Thursday. Yet it was made that much easier by casting two of the city’s best known actors, Nancy Robinette and Craig Wallace in the lead roles.

Robinette, who most recently was seen covered to her neck in dirt a production of Happy Days, is a five time Helen Hayes Award Winner who is always a joy to see in a play; Wallace has been about as busy, appearing in The Laramie Project and Our Town at Ford’s as well as portraying Frederick Douglass there in Necessary Sacrifices, which Nelson directed there in 2012.

Together they are very good in roles that seem made for them, showing eventual warmth in their interactions as they depict the age creeping up on them largely in the slowing of their movements. Robinette’s accent at first seems a little too clipped for the Atlanta woman she is portraying; she doesn’t let the twang languish. But that is the only tiny complaint about her portrayal of a character who is already 72 when she crashes her Packard (offstage, with realistic effects from sound designer Elisheba Ittoop) and begins arguing with her concerned son, played by the solid Ron Heneghan, who in many ways seems to age more than the others in the 25 years that spans the play from 1948 to 1973.

In some aspects, Uhry’s play seems a bit too genteel to reflect the racial upheaval of the Civil Rights era taking place at the same time outside the imagined mansion, but he was writing about what he knew, basing it on his grandmother and the decency of her longterm driver.

The elegance of their interactions is matched in Tony Cisek’s scenic design, dominated by long bolts of fabric design meant to emulate floral wallpaper. Aside from some architectural columns that echo those in the theater seats, the furniture and the car interior slide in and out from unseen stage hands. Helen Huang’s costumes are well-tailored and fitting to the time.

Without intermission, Nelson’s Driving Miss Daisy rolls start to finish like a well cared for Packard, with satisfaction and without many bumps or unwanted breakdowns. That’s probably how it’s been able to arrive so easily into the 21st century and a modern audience’s appreciation.