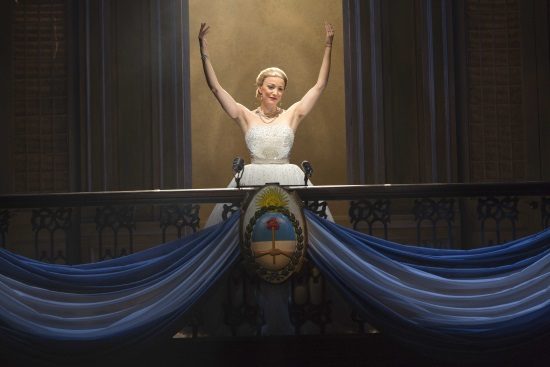 The original productions of certain musicals are forever etched in your memory. West Side Story and Fiddler on the Roof are two examples of this. The original choreography and production concepts were so perfect it’s impossible to see the shows any other way.

The 1980 Tony Award winning production of Andrew Lloyd Webber and Tim Rice’s masterpiece Evita is the best modern-day example of a perfect staging that can’t be topped. Harold Prince showed us Eva Perón’s rise to fame while focusing the show on the people of Argentina as well. Remember, under Juan Perón things got infinitely better, but also keep in mind that Eva Peron made her husband look good.

The current touring production, now at Kennedy Center’s Opera House in its final tour stop, scales back on the people and focuses more on the love story between Eva and Juan, which I guess for some people might work but it didn’t for me. I’ll explain more in a few paragraphs.

The sung through show tells the rags to riches story of Eva (Caroline Bowman). She started her journey to the top as a lady of the evening to one lounge type singer named Magaldi (Christopher Johnstone.) But Eva has a dream and eventually meets Juan Perón (Sean MacLaughlin) and when Juan is elected leader of Argentina, everything changes for Eva. She achieves almost rockstar status. This is why her nation mourned her death similar to the way we mourned John F. Kennedy. The people of Argentina loved Eva Perón.

Performance wise Howard County, Maryland native Caroline Bowman does have a powerful voice and an appropriately big stage presence. Her “Don’t Cry for Me Argentina” has many levels to it which is a welcome change from some past approaches of other Eva’s.

Max Quinlan as Che at first sounded like Mandy Patinkin but as the show went on his songs started to sound more like his own interpretations rather than an imitation. I did enjoy his act two duet with Bowman called “High Flying Adored” in particular.

As the mistress, Krystina Alabado steals the show with her one and only song called “Another Suitcase in Another Hall.” Here is a young lady that deserves to star on Broadway in her own show.

In Sean MacLaughlin’s portrayal of Juan Perón, his characterization lacks the power needed in both acting and singing which makes for a cold rather than imposing performance.

Having said that, I can’t blame any of the performers for turning in a lackluster performance. It is more the fault of director Michael Grandage whose work was recreated for this tour by Seth Sklar-Heyn. I am usually a fan of Grandage’s work (Frost/Nixon, Red)  but his choice to focus more on the love story between Eva and Juan softens the show to the point of “so what?”

There are three big musical numbers in this show that usually are showstoppers. “Buenos Aires” is the number where Eva decides she is going to make something of herself. While the song was sung well, Rob Ashford’s signature leaps and slides, recreated for the tour by Chris Bailey, look really out of place as do the military figures being part of the song. In “And the Money Keeps Rolling In” all the urgency is removed by slowing the song’s tempo down which makes no sense at all at a point when things keep building plot wise. Lastly and most disappointing for me is the act one finale “A New Argentina.” This song usually knocks you out of your seat while here it is not even close to the intensity needed. This might be due to the smaller ensemble size but what was a protest march in the original becomes a song about hope for the future which does not make for a strong act closer.

Musical Director/Conductor Robert Meffe’s orchestra sounded really good, although with Lloyd Webber and David Cullen’s rescoring, some of the intensity was lost. You can’t beat a french horn blaring that battle cry in “A New Argentina.” Putting it on fluglehorn doesn’t have the same effect.

Christopher Oram’s scenic concept is an interesting one. Much of the action is played with the Perón’s balcony as a backdrop which shows Eva’s dream always in reach.

If you have not seen Evita before you might enjoy this production, but overall this tour is more on cruise control than “High Flying Adored.”

Running Time: Two hours and fifteen minutes with one intermission.