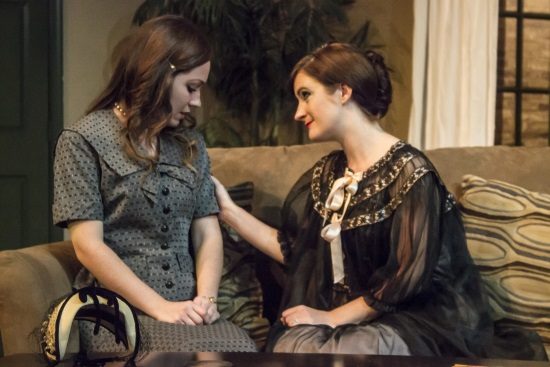 After all these years, Hedda Gabler is still the woman who gives you the creeps, the one that makes you want to keep your distance. Mad, bad and dangerous to know, she sucks the life-blood out of you and still demands more.

Good thing she’s fictional, or she’d be in a penitentiary somewhere.

The play Hedda Gabler is one of the modern theatre classics that can, in lesser hands, be an endless drudge; fortunately Quotidean’s current production argues for a more lively, nuanced interpretation. So what if Ibsen’s social drama contains themes of suicide, alcoholism, prostitution, with just a hint of infidelity; as Chekhov once said, what’s to cry about? That’s life.

…Ibsen’s ‘Hedda’ has never been so lively…

And it’s certainly worth watching this time; Hedda, the blushing bride of young scholar George Tesman, returns from her honeymoon utterly out of her mind with boredom. Their 6-month grand tour of Europe, it turns out, was spent following her hubby to moldy archives and waiting for him to finish his research every day. Now that she’s home the return of an old flame, and an old nemesis—the girl with perfect hair that she loved to hate back in high school—whets her appetite for mayhem. We are shocked, and yet we are fascinated and can’t look away for one second as she sets out to destroy everyone around her.

Thank goodness this isn’t your typical, humorless Nordic social drama; Director Michael Avolio is alive to Ibsen’s wickedly ironic sense of humor, and has honed his cast to perfection so that we laugh throughout the evening, in spite of ourselves. Not a single line is wasted, not one bad-tempered, sarcastic come-back; it is the kind of ensemble actors would give their right arm (or at least a prize dueling pistol or two) to be a part of.

The cast is headed by a truly remarkable actress, Katie Culligan, whose pitch-perfect performance as Hedda makes the production a true delight. The nails are out from the git-go, and there isn’t a word rolling off of Culligan’s lips that doesn’t have that delicious hint of malice. It’s a bravura performance of one of the most coveted roles in the theatre, not to be missed. Brian McDermott is hilarious as her utterly clueless, guileless husband Tesman; and his sainted aunt Julia, played affectingly by Laura Russell, reminds us that not all women choose to take the dark road Hedda has chosen for herself. Hedda’s old flame, Elliot Lovborg, is played with husky machismo by Christian Sullivan, and his platonic lover and intellectual partner, Thea Elvsted, is given a fine turn by Sarah Ferris.   Meanwhile Francisco Rienoso delivers one of the slickest, sleaziest performances as Judge Brack you’re likely to see: Brack, eager to service Hedda as her personal “back door man” spends most of the play plotting his way into her boudoir, and even though his lines are discreet his libido is about as explicit as it gets without the vice squad getting involved.

Avolio has adapted the script and set it in 1960’s Georgetown, an era when women like Hedda were still expected to stay at home and deeply resented it. The choice of 1963 (before the Kennedy assassination) makes sense, because this is the era when women’s magazines like McCall’s would feature previews of Betty Friedan’s The Feminine Mystique side-by-side with full-page ads for hair products.   Aware of their potential but aware of how they had been caricatured and demeaned, many stewed at home and dreamed of revenge. The only difference here is, Hedda acts on it. But in a stroke of genius, Avolio also reminds us that Washington, D.C. in the early 1960’s was still very much a southern, Jim Crow-style town; Kecia Campbell, in the role of Tesman’s maid Berta, gives us a potent reminder of the insults that “the help” had to put up with in those days, and her confrontations with Hedda are among the most significant of the evening.

Jack Sbarbori, Quotidean’s Artistic Director, has collaborated with Michael Avolio on an evocative, finely-appointed unitary set—one of Quotidean’s trademarks is fine settings on a budget, and they succeed here yet again. And Don Slater is able to evoke the different times and moods of the play effectively with his lights. Stephanie Mumford has assembled some fine period costumes (Tesman’s cardigan and bow-tie are as hilarious as Hedda’s cocktail dress is a killer). Unfortunately, the sound design for the show features a surprisingly small repertoire of songs from the era, some of which get repeated for reasons that aren’t quite clear. Given the vast catalogue available from the lat 1950’s and early 1960’s, it’s a surprise that more tunes weren’t included, especially since so many of them could have added their own commentary on the action. And I am frankly puzzled by two ‘scene change’ sequences that feature Ms. Campbell, accompanied by music, tidying up the living room without really accomplishing much. Ibsen’s script calls for a significant set change before the second act, and it’s surprising to see so little done to exploit the potential here.

This is still a finely-acted production, and well worth coming out to see; Ibsen’s Hedda has never been so lively, and the fact that she can shimmy while she plots against the world certainly adds to her charm.