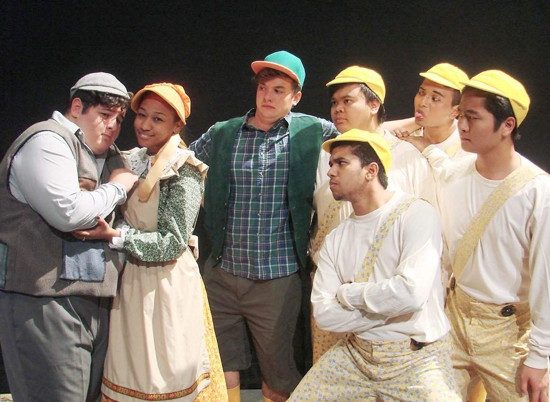 Montgomery College’s production of the musical Honk, directed by Matt Bassett, opened on Wednesday. This light-hearted, comical take on Hans Christian Andersen’s “The Ugly Duckling” has become a popular choice with amateur and regional theatres in recent years. And with cyber-bullying and marriage equality dominating the news, the time would seem ripe for a story about prejudice towards those who fall outside the “norm.” So, does MC’s production of Honk fly high, or fall to earth?

Honk begins on a farm, and quickly (and cleverly) establishes the world of its animal community. The ducks, turkeys and other animals live together mostly in harmony. (Like Cats, this is an all-animal musical. No human characters ever appear onstage.) Puns and animal/human double entendres abound.

A pair of ducks named Ida and Drake are looking forward to the birth of their five new ducklings. But when the happy day arrives, their joy is tempered by a surprise: One of the five is an odd-looking (albeit friendly) misfit. Jason Guerrero plays “Ugly,” the aptly named odd duck in question. Ugly’s unusual appearance makes him an immediate subject of derision within his family and community.

The cast performs their roles with enthusiasm and a full commitment to their animal characters.

After failing to fit in, Ugly does what so many other characters in children’s stories have done (think Rudolph, Pinocchio or Dorothy). Ugly leaves his home and goes on a series of colorful adventures, making friends (and one enemy) and learning a thing or two about life.

The overall production moves a fast clip, although one can’t help but wish the production had found a broader range of emotions to explore. Ugly’s ostracism from the group and estrangement from his mother never evokes any palpable sense of drama or pathos. Nor do we ever feel that Ugly is in a real danger during his travels in “the world.”

Scenes generally play out in the same style and emotional temperature, without much variation. And although the songs by Anthony Drewe and George Stiles are witty and memorable, interest begins to lag during the second act. Fortunately, it’s at this point that the writers give us a show-stopping number (“Warts and All”) to inject the play with some welcomed energy and new ideas. This song features a memorable group of singing and dancing frogs. Actor Jacob Meile (accompanied by the entire cast) performs the number with terrific verve. Sandra Atkinson’s choreography here is a fun satirical fusion of Bob Fosse and Busby Berkeley.

The cast performs their roles with enthusiasm and a full commitment to their animal characters. Guerrero makes an appealing Ugly, and throws himself into his role with Curly Howard-like energy and boyish appeal. One wishes the writers had given Ugly more drive and ambition. Unfortunately, the character’s congeniality deteriorates into passivity far too often.

Other cast standouts include Rachel Johnson as Ugly’s compassionate mother Ida. Her strong voice and solid acting made Ida a true presence in the production. And Solomon Parker portrays the farm’s devious cat with the confident flair of a young Ben Vereen.

Roger Bridges colorful set is full of cartoonish, primary color charm, and an underwater sequence is truly memorable. Another highlight is Peter Zakutansky’s costumes, which brilliantly use human clothes to suggest the appearance of animals (ducks, turkeys, frogs, chickens, geese, etc.) The play is mostly lit in a basic wash throughout, and variation in lighting choices might have given the show some visual variety. (The stage seems at times a little large for the show that it contains.)

In the final analysis, one wonders what audience Honk is intended for. At a running time of well over two hours, it would seem too long for small children. (Although parents will be grateful that the show avoids any age-inappropriate content.) Adults, on the other hand, may find the story overly simplistic. (Honk never explores the darker, more adult themes found, for example, in Stephen Sondheim’s fairy tale-based musical Into The Woods.) The show’s predictable (if welcomed) theme of tolerance is rendered without much adult nuance or insight. One can at least be grateful that Honk steers clear of Shrek/Simpsons-style pop culture references (although having the animals use cell phones and participate in a reality show seems oddly inconsistent with the overall concept).

In the end, Honk falls into a bizarre middle ground, too sophisticated for kids but not sophisticated enough for adults. Still, the show boasts catchy songs, colorful sets, clever costumes and a very game (no pun intended) cast. Honk gets a mild recommend.

Advisory:  The show is suitable for all ages.

Honk plays through October 12, 2014 at the Robert E. Parilla Performing Arts Center at Montgomery College in Rockville.  For tickets click here or call the box office at (240) 567-5301.