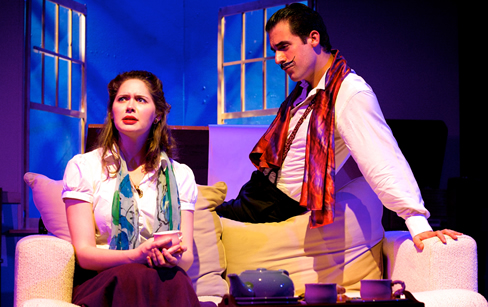 From the moment of walking through the doors of The Writer’s Center in Bethesda, MD, the Flying V plunged the audience for Lobster Alice into the world of Wonderland. Before the ticket booth, you could give a line from the Lewis Carroll book and watch it spring into full coulour through a live painting. Behind the tickets were cutout pictures and trinkets from Disney’s Alice in Wonderland, and books about Salvador Dali, the famous Spanish surrealist painter, perhaps best known for his melting clock images. These books on Dali and his work beckoned us to bend our minds in the little waiting room in the minutes before the show. As we went through the doors and into the theater, The Flying V invited us to participate still more in the magical world of Lobster Alice by responding in fluid thought with chalk drawings and phrases on chalkboards.

For anyone uncertain what lobsters and Alice have to do with each other, or anyone prone to wondering, imagination and the marvelous, this play is a must-see. It is the story of a man and a woman whose lives are turned upside down and inside out by the entrance of Dali and the effects of his surrealist beliefs and practices on their daily lives. Directed by Amber Jackson, the story begins in 1946 at Disney studios, where the straight-laced John Finch is struggling to create Alice in Wonderland and can only come up with a “vanilla” animation. His frustrations are increased by his having fallen in love with his secretary Alice, a girl we soon discover is as curious as her character namesake. Into this setting whirls the famous Salvador Dali, there to create a short feature with the help of Finch and his “minions.” His presence immediately begins to drive Finch crazy and tantalize Alice’s insatiable curiosity as he pulls them headfirst into a rabbit hole.

“the result is an energetic, magnetic, and enthralling force “

This play is surely a magical experience of mythic proportions as, on a single set of Finch’s office, we are transported in and out of the minds and experiences of Finch, Alice and Dali until at some moments you are no longer sure whether you are experiencing reality or something else. As with Dali’s paintings, there is always something hidden that a new perspective may give light to—a moment comically shown as Finch hops around on stage showing Alice different angles on Dali’s sketches.

Finch, played by Daniel Corey, gives an endearing performance as a traditional character who, when everything around him lies in ruin can rouse himself from the rubble, give a speech so impressive it nearly knocks him, as well as the crowd, over, and stays at work for nearly a full week non-stop to produce some of the most beautiful 14 seconds of film short ever. Corey’s facial expressions and spot-on humour kept the audience laughing and charmed as he slowly transforms himself along with Dali’s short film and Disney’s Alice.

Alice, played by Jenny Donovan, delivers a passionate performance that silenced the audience entirely when in the midst of much madness she slips into a ballet performance as a flower-crowned woman and dances with power and beauty along with a breathtakingly fluid actor, Ryan Allen Jones. Her character is easily identifiable, it’s for anyone who has ever wondered about “something more” and dared to explore, grow larger and smaller (both of which we see her, like the wonderland character, experience), and come out on the other end changed, but more herself than before.

Ryan Alan Jones not only plays Alice’s deceased love, Thorton, but also the Wonderland Caterpillar, who is wise, absurd and captivating. The fluidity of his movement is so astoundingly like water that you wonder at the solidity of him.

Of course, neither Finch nor Alice would likely have experienced any rabbit holes without the commanding presence of Dali, played by Zachary Fernebok, the only Flying V Company Member in the cast. Fernebok plays Dali to perfection, bringing the zany, the curious, the fabulous and the outrageous all into one person whose great desire is to cause everything he comes into contact with to become a little more chaotic and so to be seen with a different perception. Fernebok worked hard to embody Dali in his acting, and the result is an energetic, magnetic, and an enthralling force that could leave audiences overwhelmed, much as Finch and Alice are powerless against the dynamism of Dali. (The marvelous moustache of Dali may be one of Fernebok’s favourite things about playing this character, mind you…)

Both the rabbit holes of Alice in Wonderland and Dali’s idea of fluidity and elasticity are beautifully illustrated throughout the play as characters drip through bulletin boards, swirl in and out of the center of a cushy couch like water, and occasionally interact with both with the past and the present at once—as in one scene where Alice is talking to the deceased Thorton and a very present Finch in the same moment.

We learn at the play’s end from Jason Schlafstein, Producing Artistic Director, that the Flying V has had this play for three years while waiting for the perfect time to produce it. That moment was definitely now, and three years of waiting gave us the ideal cast to bring into it all layers of life—real and surreal—the characters of Lobster Alice, as well as the inspired directorship, artistic vision and design that made this play an otherworldly, wonderous experience.

Advisory: Adult themes and scenes throughout.

Lobster Alice is playing at The Writers Center in Bethesda, MD until October 12, 2014. The theater is located at 4508 Walsh Street, Bethesda, MD‎ and is Metro accessible. Tickets are $15 and may be purchased at the door or online.