Theatre Review: ‘Next to Normal’ at Center Stage 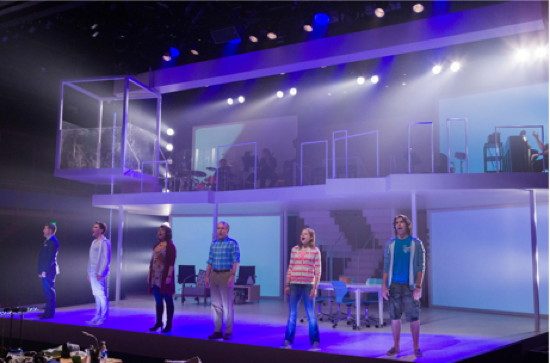 The cast of ‘Next to Normal.’ Photo by Richard Anderson.

Next to Normal, Center Stage’s second entry into their “Step Into New Worlds” season, directed by David Schweizer with music by Tom Kitt and Book and Lyrics by Brian Yorkey, is a modern rock opera that tackles very complex, contemporary issues, and it does so with hard-hitting lyrics and music, and strong characters.

This dark musical drama/comedy, which opened on Broadway in April 2009, is the winner of three Tony awards and the 2010 Pulitzer Prize for Drama. Normal tells the story of a suburban family struggling with deep losses and mental illness. The matriarch of the family, Diana Goodman, is suffering from a bipolar disorder that is associated with mood swings that range from the lows of depression to the highs of mania. Her husband Dan, clearly wearied, strives to make her better with the use of any and all medication available and quick trips to the doctor as soon as her symptoms begin to present themselves. There is also an overachieving 16-year-old daughter trying her best to get noticed and an 18-year-old son encased in his mother’s anxiety.

His (Justin Scott Brown’s) rendition of “I’m Alive” is heartbreaking.

Caleb Wertenbaker’s set design is definitely a star of the show. Two floors of modern steel and white columns, a split-level staircase and a clear, life-size box built on a platform on stage left that, to me, represents the action going on inside Diana’s manic-depressive brain. There is also a clear medicine cabinet mounted on a column at center stage that is overflowing with pill bottles with bright red caps. The cast makes good use of the stage, and the abrupt ending of the second floor, with little to no railings, adds to the tension as the cast precariously stands at the edge while singing about trying to hang on to any part of normality.

The real stand out in this show is the 18-year-old son Gabe, played by Justin Scott Brown. Brown’s voice never wavered, and his actions made me feel all of the emotions of loss, worry and love that saturate his character. His rendition of “I’m Alive” is heartbreaking.

Ariela Morgenstern as Diana Goodman did a good job singing her songs, however I wish there was more range in her performance. To me, every emotional swing was presented on a manic level. I would have like to have seen and heard more quiet and sadness in her low points. The same can be said of Kally Duling’s performance as Natalie, Diana’s 16-year-old daughter. I realize her character is supposed to be hyper-focused, but again, even in her sadness there was little calm.

The live band soared with energy, but the songs felt rushed and it was difficult to hear some of the actors in a few places throughout the performance. Unfortunately, songs sung by Michael Winther, as Dan Goodman, were often drowned out. Matt Lutz as Dr. Fine and Dr. Madden provided most of the comic relief with his rock-and-roll style of delivery, and Matthew Rodin as Natalie’s boyfriend Henry has a pure and strong voice.

Next to Normal’s subject matter is poignant, but it puts to music what was not long ago a subject that was taboo to talk about. I am sure it will aid people in understanding that there is help to deal with mental illnesses and that with strength and love, there is hope.