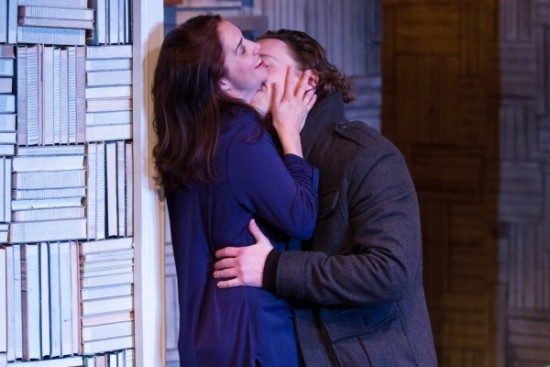 Holly Twyford and Luigi Sottile as Olivia and Ethan. Photo by Theresa Wood.

It is not every day that I go to see Sex with Strangers, let alone talk about it afterwards. Signature Theatre touched on that in the program’s welcome message, quipping, “We’d have said simply, ‘Welcome to Sex with Strangers’ but we thought that could be misconstrued.”

far more to do with intimacy between minds, a love affair with words, and what happens when our public personas are thrust upon our private interactions than sex itself

Sex with Strangers is set in the ARK theatre at the Signature; a wonderfully intimate space that allows the audience to feel more like a bug on the wall within the unfolding scenes than a distant audience observing a play from outside. The house lights went down, the wind whistled, the fireplace crackled, and snow began to gust outside the window. Olivia sat down on the couch with her novel, and then a car pulled up and her evening goes on its head.

Letting a stranger in can always be dangerous; in this case, it turned Olivia’s world on its head. When the dashing but brash Ethan, 28, stomps in, the last thing Olivia, 39, seems able to imagine is falling happily into his arms at the end of the evening; the man is loud, rude, and a completely different generation from her (“no internet!?”). Yet that is exactly what happens–after all, opposites attract, and as Ethan points out, there’s nothing else to “do,” right?

While Sex with Strangers was certainly a bosom heaving sexual romp, it is also as much or more a story with far more to do with intimacy between minds, a love affair with words, and what happens when our public personas are thrust upon our private interactions than sex itself.

Written by Laura Eason and directed by Aaron Posner, the story is about two ambitious writers who have a love affair with words first and each other second. Olivia, played by Holly Twyford, is a writer gone hermit after her first novel received mixed reviews, and Ethan, played by Luigi Sottile, is a boastful blogger whose exploits exploded into a best-selling book. Both are working on another piece that they believe is their best work yet. Where Ethan wants to share his work with the world, though, Olivia intends to hoard hers.

Ethan proceeds to draw Olivia out of the shell she has built up around herself and helps her find the courage and ability to publish again under a persona. Where the persona they create for her finds credibility and literary laud, however, the persona that he created around his publications prevents him from being taken seriously as an artist and lover of words: a “real” writer.

“Who are you?” Olivia barks at him at the play’s beginning, clutching a pillow to her chest and trying to figure out how to handle the guy who just strode in and usurped her evening. This question carries through the entirety of the play, as the two strangers explore who each other is and discover who they themselves are, all while having to carry the identity of their created public persona and experience the effects of that creation on their very real, personal lives. It is this question of identity which builds intensity through the performance as the nature of intimacy, the character of strangers, and the power of words on life are artfully explored.

Compellingly played by Twyford, Olivia is a painfully hurt human. Twyford did such a beautiful job embodying the feelings that Olivia had nursed over the years and creating shields around herself. Carrying pillows in front of her. Huddling in a blanket. Hiding in any way she can from strangers and even from herself. Olivia behaves like someone who has been alone for so long that she has forgotten herself a little, and watching the transformation of Olivia through to the end of the play was mesmerizing as she came back to herself, took charge of her appearance and command of her gestures and body, and control of her emotions and future at last. The honesty of Twyford’s portrayal of Olivia made her an intimately real character.

Luigi Sottile, playing the young Ethan, had quite the challenge set up for him to make believable a character with the soul of an artist who could have produced something so “humiliating to all those girls” as his “Sex with Strangers” series. He lets us wonder in agony with Olivia at times which persona he really is, the “dude” who talks crassly to his “people” or the man in the room with Olivia who holds out to her a beautiful soul, who helps her find herself again, whose own mind seems exquisite and deep. Sottile played Ethan with brutal believability.

All of the play takes place across two sets, with the first half of the program unfolding in snowy wonderland at the writer’s retreat, and the second half at Olivia’s book-filled apartment in the city. Lights and music and the scenes taking place outside the windows all serve to pull the audience into the scene and through the passing of time along with the characters.

Witty, full of crackling dry humour, amused stabs at generational differences, poetry, and references to wonderful pieces of literature like that of Marguerite Duras, Sex with Strangers is a deeply thoughtful, timely production that audiences must experience. While some of the scenes could be a little slow-moving, the two-person cast kept attention with their facial expressions, body language, and chemistry. “It just feels personal, somehow,” Olivia says at one point in the play. “That doesn’t mean you can’t tell me,” Ethan answers, and they are both quite right.

Set design was done by J.D. Madsen, with sound by James Bigbee Garver, lighting by Andrew Cissna, and costumes by Katherine Fritz. Tickets start at $40, click here for tickets or by calling 703-573-SEAT. Sex with Strangers runs through December 7, 2014 at Signature Theatre, 4200 Campbell Ave., Arlington, VA.