Theatre Review: ‘The Island of Dr. Moreau’ at Synetic Theater 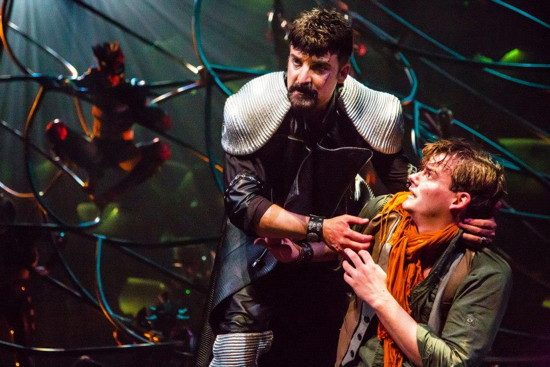 Let us ponder the line between beast and human. Is there one? Or alternatively, between genius and sociopathy? Synetic Theater’s The Island of Dr. Moreau begs the discussion. Directed by (and starring) Paata Tsikurishvili, this modern adaptation of H.G. Wells’s nineteenth science fiction novel is as disturbing today as it was to its original readers. With mutilated people, torture and brainwash, there is no shortage of unpleasant themes. Fortunately, we humans have an affinity for the exquisitely grotesque. Thus, combined with its extraordinary movement, costuming and pure theatricality, this performance is exhilarating to watch.

…Synetic’s most recent production is a show worth experiencing.

This adaptation’s gruesome plot line, which centers on an exiled scientist’s cruel human vivisection projects, provides many opportunities for creative movement—an area where Synetic thrives. The opening scene shows Dr. Moreau (Tsikurishvili) experimenting with his semi-human creations, dubbed the “beast creatures.” A cross between human, wild animal and robot, these creatures respond to the pain with authentic yet graceful air-bound shocks, exhibiting their expert physicality.

With choreography from Irina Tsikurishvili this troupe of eight gifted dancers is a prominent visual spectacle for more than their athleticism. Each “beast” wears an equally intricate and outlandish full-body costume, designed by Kendra Rai. Among other accoutrements to the play’s nightmarish reality was the use of the futuristic “jungle gym” on set, brilliantly designed by Phil Charlwood, upon which the actors climb and swing. Rounding out the multi-sensory experience is sound design from Thomas Sowers whose use of voice echo and subtle background noise never fails to enhance the stage’s environment, be it the sinister island’s jungle or Dr. Moreau’s twisted experiment chamber.

The use of dialogue, unusual for Synetic’s productions, affords the show the ability to delve deeper into the story’s more academic themes. Most conversations occur between shipwrecked scientist Parker, played by a capable Alex Mills, and the other “humans” on the island, who include the doctor’s alcoholic assistant Montgomery, played aptly by Dallas Tolentino, the doctor’s daughter, played by Eliza Smith, and of course, the devious Dr. Moreau himself.

Tsikurishvili performs as Dr. Moreau with spirited verve. Moreau, whose vivisection experiments in the civilized world left him exiled on a desert island, believes wholeheartedly in his ability to manipulate evolution. With the exception of his daughter (Smith), Moreau lacks all empathy for his fellow man, and seems to prefer the stench of mutilated bodies to the so-called “stench of answered questions,” which he associates with common, insignificant death. Proving his character’s megalomaniacal theories, Moreau cuts into his own arm during a later conversation with Parker, suggesting the pain is “purely primitive sensation.” Tsikurishvili’s theatrical dedication contrasts seamlessly with the wide-eyed Mills as Parker, who pinpoints the doctor’s warped intentions without hesitation.

The beasts on Moreau’s island are ruled by four key laws: “Thou shall not crawl on all fours. Thou shall not scratch the bark of trees. Thou shall not chase other men. Thou shall not eat flesh.”  Judging by these four laws, I was initially perplexed: Are the beasts supposed to be human or animal? And yet, maybe this ambiguity is intentional. The laws might be either an idealized human code of conduct or animalistic.

The Island of Dr. Moreau exhibits both sensational performances and relevant themes. Combined with enthusiastic performances by dancers and actors alike, Synetic’s most recent production is a show worth experiencing.

Advisory: The production is recommended for ages 16 & up due to violence, gore and strong language.