Theatre Review: ‘The Mystery of Edwin Drood’ at GMU 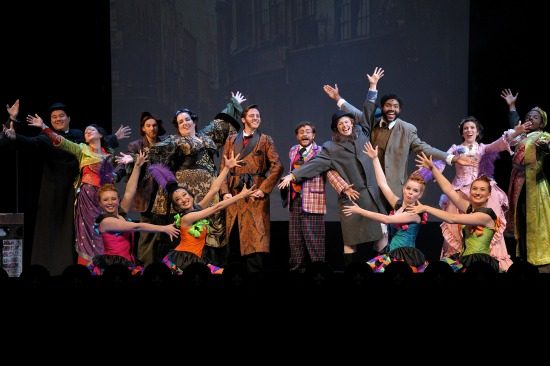 The cast of The Mystery of Edwin Drood. Photo by Beth Rado.

It’s not often that the pre show announcement states, “Ladies and Gentlemen, please turn on your mobile devices.”

Actually, the show cries out for such touches. An inventive musical fusion vehicle in its own right (Tony award winner in 1986), the show is based on the unfinished novel of Charles Dickens, leaving pop songwriter Rupert Holmes, who wrote the book, music and lyrics for this fun trifle of a show to refashion the novel into a live parlor game for theatergoers.

The story offers up these Dickensian characters–Drood’s uncle, the choir instructor with a bit of an opium addiction, John Jasper (Dylan Toms ), who is in love with his pupil, Rosa  (Emma Gwin). Miss Bud, Drood’s fiancée, has also caught the eye of the high-spirited and hot-tempered Neville Landless (Lawrence Hailes), a foreigner from Ceylon with his twin sister, Helena Landless (Arami McCloskey) and Drood (Alexandra Bunger-Pool) take an instant dislike to one another. Drood later disappears under mysterious circumstances.  In keeping with music hall pantomime tradition, Drood is played by a woman, using a gruff stiff voice.

It is truly so much material that one has to relax the mind and let it all simply happen to you.

In this swirling pastiche of light, color and sound, we have the blending of sensibilities–Elizabethan propriety surrounded by a theatre troupe retelling the story as part of a music hall show, providing rollicking ballads, slapstick, and knowing glances to the audience. The Chairman (Kyle Imperatore) as the narrator music hall barker keeps everything in place, a winning wink wink nod nod turn by Imperatore who appeared in Into the Woods last season. Great understated motions and fine accent as the show’s ringmaster.

Impressive visual work projecting outside locations across the full backstage, and suggesting an opium hallucination.  It is truly so much material that one has to relax the mind and let it all simply happen to you.

Alas, it all screeches to a halt as the scrip…runs…out. Audience participation! A la reality shows American Idol and Survivor, this was actually before its time.

Now the question– who slew Edwin Drood? is thrown into the lap of the audience in the show’s finale. Cell phones scramble to text the possible killer and decide what ending will be performed, though it did slow the show a tad.

The collegiate production does itself proud. I expected great energy and got it. But many performers were beyond their years. Toms provided fine stage presence and strong baritone as the evil Jasper. Gwin provided an effortless operatic tone. Bunger-Pool had wonderful expression and derring-do in several roles. The Princess Puffer (Rachel Harrington), a mysterious purveyor of opium, adds a comic twist and followed up with strong vocals.

The full cast gave wonderful stage pictures on freeze moments, little appreciated yet vital to a show such as this. Directed by Ken Elston, this is a show not particularly deep, but quite crucial in terms of timing and moving parts.  Musical Direction by Dennis Layendecker and a full orchestra was well received, if more vigorous than experienced.