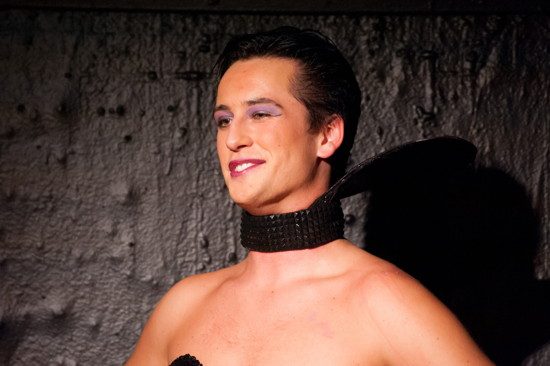 ‘The Rocky Horror Show’ is definitely a show where the actors to have to wave all inhibitions goodbye and everyone on stage must fully commit to playing very sexual beings for this show to work, and this production does it in abundance.

For those Rocky Horror “virgins,” the show begins as a naïve young couple, Brad and Janet, suffer a car break-down and are forced to seek help at a nearby castle. It is there they meet Dr. Frank N. Furter, a pansexual, cross-dressing, mad scientist, and his minions: Riff Raff, his sister Magenta, his ex-lover Columbia, another ex-lover Eddie and his new lover and creation, the blonde and muscle-bound Rocky Horror. Brad and Janet’s convictions are put to the test as Dr. Furter executes an evening of merriment and debauchery.

Garrett Zink as Dr. Frank N. Furter is full of energy and had no problem commanding the stage and committing to a role where the costumes are sparse and the shoe heels are high. His rendition of “Sweet Transvestite” was one of the highlights of the show.

Bridget Linsenmeyer as Janet is another standout. She has a strong, clear singing voice and is a joy to watch as she grows from a timid, shy girl into a strong, decisive woman. Phil Vannoorbeeck as Brad was terrific at his transition into his sexual awakening. Jim Baxter as Riff Raff also has a strong stage presence, and the final scene when he is ready to go home is one of the best I’ve seen. Chip Meister as Dr. Everett Scott is hysterical and Stephen Edwards as Rocky is perfect as the half-brained but achingly sweet creation of Dr. Furter.

The Rocky Horror Show has always been a show that welcomes audience participation, and this production is no different. What is different here, however, is the “extra” cast person, the director Greg Bell. Greg has promised to be at every show to host the pre-show and provide commentary throughout the show. His lightening fast comments and observations add to the comedic content. I loved watching the cast trying not to laugh along with the audience at several points throughout the show. To me, this added to the up close and personal experience that is so important for a good Rocky Horror production.

The live four-piece band, The Dead Band (Michael Tan on keyboard and also music director, William Georg on percussion, Jarrett Rettman on bass and Christie MacDonald on guitar), does a great job of keeping a lively pace without overwhelming the action on stage.

The Rocky Horror Show is definitely a show where the actors to have to wave all inhibitions goodbye and everyone on stage must fully commit to playing very sexual beings for this show to work, and this production does it in abundance.

Running Time: One hour and 40 minutes with one 15-minute intermission.