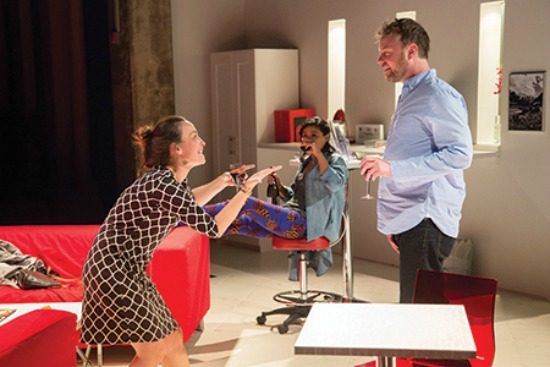 The Wolfe Twins at Studio Theatre’s Studio Lab explores the relationship of the Wolfe twins Lewis (Tom Story) and Dana (Brigit Huppuch). Half Jewish on the wrong side, “Irish” twins from Texas, Lewis and Dana journey to Italy in the wake of their father’s death to reconnect.

A Studio Lab production, The Wolfe Twins is an original world-premiere play written by young playwright Rachel Bonds specifically for the Studio Theatre audience. Every year at the beginning of the planning process for the Studio Theatre’s upcoming season, playwrights submit original work for consideration. If successful, Studio Theatre agrees to support the playwright’s process financially, creatively and for an unspecified time period. This process can take years, or as is the case with The Wolfe Twins, mere months. Now in its fourth year, Studio Lab creates a bridge between the artist and the community. Pretty cool, right?! And ultimately, from what I can tell, it’s working. The matinée showing of The Wolfe Twins this Sunday was one of the most jam-packed productions I have been to in months.

The entire play is bottled within the sleek, tidy (apparently Ikea-sponsored) lobby of an Italian B&B in Rome. Although Dana and Lewis are all smiles from the moment they drop their bags, the cracks of their mutually implicit façade are evident. Initially the dominant personality, Dana has their entire itinerary aggressively planned. Lewis, unwillingly overpowered, decides to take his revenge by making small jokes at Dana’s expense to Alex (Silas Gordon Brigham), the B&B’s ever-attentive proprietor (and unwilling target of Lewis’ passive-aggressive wrath).

Lewis senses a kindred spirit in fellow traveler Raina (Jolly Abraham), an effortless and enigmatic beauty who arrives at the B&B under cryptic circumstances. Finally, after a drunken night out on the town, long-lost secrets and inappropriately placed trusts are revealed between the three relative strangers, causing a massive breakdown in confidence between the siblings (largely facilitated by Raina’s carelessness).

In The Wolfe Twins, there is always a look, a word or an action for the audience to dissect, which makes the production not only visually engaging but intellectually stimulating. Refreshingly frank, Bonds does not shy away from portraying the intricacies of human nature and grotesque. Inspired by the novelty of new faces and places, Bonds takes her characters away from the comfort of their familiar settings and away from the people they find comfort in and places them in the path of foil characters who draw out their insecurities.

Onstage, Story and Huppuch have the brother/sister chemistry that you often find between long-lost siblings. Over-expectant and hesitant, the siblings are quick to prove to others and each other that they still know each other. Huppuch is a master of the hesitant-annoyed-happy but not happy facial expression that we are all familiar with but can be almost impossible to fake. Eventually Huppuch’s hesitant and pert Dana becomes the bossy, brassy b*tch that her brother believes he knows and loves. Unforeseen and bewildering as it is to the audience, Huppuch faces the portrayal of an internal battle between the two versions of her character with surprising elasticity.

Meanwhile, Story is so in tune with the intricacies of his character that you leave the theatre wondering just how like his character his is in real-life. Although the nature of his character is ostensibly laid-bare from the beginning, Story continues to surprise through unexpected revelations and inexplicably immature behaviour.

Unfolding at the pace and with the style of a Scandinavian murder-mystery, every look and gesture has subtext meant to ensure the constant engagement of the audience. Unfortunately, this two-hour production has no intermission, a trend that seems to be sweeping the DC metro area by storm supposedly but not actually adding to the coherence of a production. Overall, The Wolfe Twins is a disarming, svelte production. Everyone has that one friend that they no longer speak to and with that in mind, The Wolfe Twins is an exceedingly relevant piece of contemporary theatre.

Running Time: One hour and fifty minutes, no intermission.