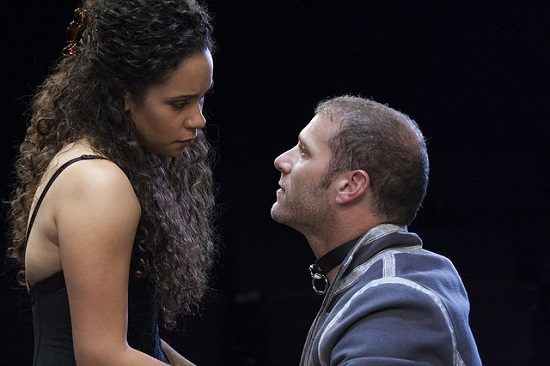 Kathryn Tkel as Vanda and Elan Zafir as Thomas. Photo by Katie Simmons-Barth.

“Things are not always what they seem…or are they, ” says Joseph W. Ritsch, director of Venus in Fur now playing at Rep Stage in Columbia, Maryland.

Written by David Ives in 2010, this two-person play takes place in a New York City studio apartment which is being used as a casting office for a new play called Venus in Fur, an adaptation of the 1870 novel Venus in Furs by the Austrian author Leopold von Sacher-Masoch.  Yes, this is a real novel, and it is said that it inspired the term Masochism.  Did your eyebrows raise?  I know mine did.

Frustrated that he can’t find a suitable actress to play Wanda von Dunayev, writer and director Thomas Novachek (Elan Zafir) is left alone in the office lamenting his feelings to his fiance Stacy on his cell phone.  Bursting into the apartment with her tiny child-sized Barbie Doll umbrella, Vanda (Kathryn Tkel) is late for the audition but is determined to do almost anything to get the part. Vanda is so late that there is no one left but Thomas to read the role of Severin von Kushemski.  And so the most thorough audition I’ve ever seen begins.

Venus in Fur is smartly directed.  From concept to completion Joseph W. Ritsch nails it.

The seating is set in tennis court style with the stage in the center and the audience being on opposite sides.  During the performance I found myself watching some of the jaw-dropping reactions from the audience facing me.  This was no accident according to the director who adds just a hint of stage lights onto the audience.  He wanted the whole experience to be voyeuristic; from the audience peering into the apartment to being able to spy on how other audience members are responding.    Though it is fun to watch the audience reactions, the performances are so engaging that I was not overly distracted by it.

The staging of the actors is seamless.  In the play the performers have to transition from being their characters to acting like the characters in the play.  Sound confusing?  It isn’t really, thanks to staging that is deliberate, interesting, but most of all, it helps to tell the story.

Scenic designer Daniel Ettinger gives us a New York City studio apartment with mute colors, a window with a cracked panel, and dirty, worn out paint, and a pole.  Yes, a pole that goes from ceiling to floor.  Throughout the play there is a thunderstorm and lighting designer Joseph R. Walls does a fine job with his lightning effects.  William D’Eugenio’s sound design also added to the production values. For this production, Rep Stage utilizes the most speakers ever used for a production, using 12 strategically placed speakers throughout the theatre.

There are only two performers on stage so they better be good, right!  Thankfully both performers have enough spark to ignite David Ives’ provocative and witty script.

Elan Zafir is making his debut at Rep Stage in the role as Thomas Novachek.  He is believable, portraying a writer/director who truly loves the characters in his play because they have “opera-like emotions.”  “This is why people go to plays to experience emotions they don’t feel in real life.”

Kathryn Tkel is also making her debut at Rep Stage in the role as Vanda.  This sexy and spunky brunette does a fine job at going from her NY accent to the voice dialect of the character she is auditioning for.  What is more, Kathryn is able to deliver with good timing the many funny one-liners.

Together, they play off of each other nicely in this cat and mouse game of slave verses master and mistress verses slave.  Reading as the character Wanda von Dunayev, Vanda says, “you say you are my slave, but you are the one who has mastered me.”

But is she telling the truth?  Does Vanda get the part?  Where does fantasy blend into reality?  Come and watch Venus in Fur at Rep Stage and you will find some answers to some rather intriguing questions.  It is a guilty pleasure indeed.

Running Time: About 95 minutes, with no intermission.

Venus in Fur by Rep Stage plays through October 19, 2014 in the Studio Theatre of the Horowitz Visual and Performing Arts Center at Howard Community College — 10901 Little Patuxent Parkway, in Columbia, MD. For tickets call the box office at (443) 518-1500, or purchase them online.