Theatre Review: ‘Women on the Verge of a Nervous Breakdown’ at American University’s Harold and Sylvia Greenberg Theatre 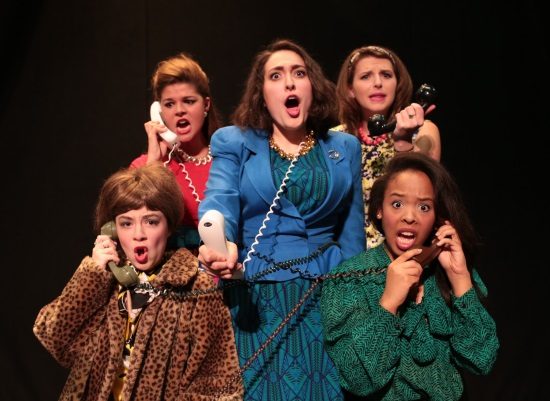 I attended the October 18th showing with the mindset that there would be a lot of male bashing and disgruntled women with no recourse.

To my surprise, this musical was nothing of the above. Carl Menninger (director) was able to playfully portray the poor decisions that women make when it comes to men.

I whole-heartedly enjoyed watching this production come to life.

The setting is in the ‘80s. Clothes are baggy and colorful while the hair is big. The play starts out with a long musical introduction beautifully played by the orchestra and at the hand of musical director, Darius Smith. Shortly after, we are introduced to Pepa (played by Izzy Smelkinson). She’s an actress/singer that is in love with a colleague. However, her lover, Ivan (played by Jesse Saywell), just ended their relationship.

We watch as Pepa searches the streets for Ivan and for answers as to why he has left. Almost immediately, she and Ivan burst into a song for a project called “Lie to Me.” The song depicted a picture of a couple yearning to be together no matter what the situation, even if the other was to lie. It was telling to their situation and I enjoyed watching it.

Ivan’s wife Lucia (played by Linda Bard) is on the hunt for Ivan’s mistress. Bard is hilarious as she portrays a half-crazy estranged wife with a blunt personality. But it is Smelkinson who, throughout the play, allows the audience to take a ride with her on her emotional roller coaster. The more enraged she becomes with Ivan and the break-up, the more she gains strength to finally say goodbye to him. By the end of the production, she realizes that she didn’t need Ivan after all.

Lucia sung a beautiful song entitled “Time Stood Still.” The song was telling of her mood. She, being an older woman, was obsessed with the past and tried her hardest to regain all that she lost. The song spoke to me in many ways because I often wish that time stood still for just a few seconds.

I enjoyed the story of Pepa’s friend, Candela (played by Kendra McNulty). While Pepa was going through her situation, McNulty kept me entertained by going through her a series of events with one of America’s most wanted men. She desperately searches for Pepa while Pepa is on a hunt for Ivan. And with each attempt to seek help, Candela finds herself more fearful for her life and near the end of the play nearly commits suicide. The hilarious back and forth between Candela and her lover was the highlight of the show, even though her story was an offset to Pepa’s.

The set is impressive. The stage is wonderfully lit and the colors are vibrant. The orchestra is impeccable. The arena is the perfect setting to host a live orchestra because the great acoustics. Set changes are playful and creative. We were often greeted by Jordan Halsey (as a taxi driver) who semi-narrated the production, helping to fill gaps in between scenes.

I whole-heartedly enjoyed watching this production come to life. Many thanks to Menninger and the entire cast for keeping me entertained throughout the play.

Running Time: 2 hours and 30 minutes with a 10-minute intermission.

The musical runs through October 25, 2014 at American University’s Harold and Sylvia Greenberg Theatre. The theatre is a short drive off the main campus, located at 4200 Wisconsin Avenue, NW, Washington, D.C. 20016. For tickets click here.