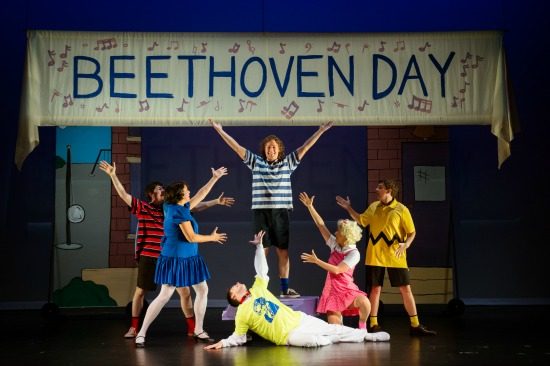 Is there anyone who doesn’t have fond memories of reading Charles M. Schulz’s iconic comic strips or watching the cartoons on a Saturday morning? The adventures of Charlie Brown and the Peanuts gang are one of those few cross-generational, culturally significant gems truly embedded in the foundation of American culture.

More than once I found my mouth hanging open in wonder.

You would have known you were watching You’re A Good Man, Charlie Brown even if you had walked into the theatre with nothing but your vision to guide you. Director Richard Bird and his production team, principally Producer Laura Baughman, Stage Manager Mark V. Deal, Choreographers Jennifer Lambert and Blake Green, Set Designers Richard Bird and Sara Birkhead (also Master Carpenter) have ventured above and beyond the call of duty to make this production as true to the Charlie Brown style as possible. Linus (Patrick Graham) and Lucy Van Pelt (Alana D. Sharp) zone out in front of the TV on a comically oversized couch, while Charlie Brown (Richard Farella) struggles to fly a kite that once airborne truly looked as if it was being blown about in the wind. More than once I found my mouth hanging open in wonder.

Bird approaches Charlie Brown in short, segmented scenes, as if each exchange between characters is part of a comic strip panel. The characters wander on and off stage, exchange dialogue and then exit once more after the joke is delivered. After a few segments, there is a longer scene in which a song was sung. As with most comic strips or cartoons, there is no plot but Charlie Brown does take place roughly within the scope of one day.

What makes Reston Community Player’s Charlie Brown truly special is that under Bird’s direction everyone on stage shines for different reasons at different times. Isn’t that how a well-balanced production should be? Farella’s Charlie Brown displays the appropriately peculiar brand of melodramatic optimism and Nina Jankowicz’s Sally Brown is unmistakable as his precocious little sister. Sharp and Graham pulled off the recognizable amount of sibling rivalry and affection. Eric Hughes’ Schroeder deals effectively with Lucy’s advances while managing to further his own peculiar agenda and Terry Barr as Snoopy was just plain brilliant. Each character leads their own musical number and the chemistry between the group is that wonderful brand of true affection and unpredictability you often see in little kid friendships. Barr deserves special mention for the pure physicality of his role as Snoopy.

Overall, the Reston Community Player’s managed to take Charlie Brown and make it their own while still reflecting the beloved characteristics of the original. You’re A Good Man, Charlie Brown is the perfect production for both those who have known and loved Charlie Brown their entire lives and those who are being introduced to him and his gang for the very first time.

Running Time: One hour and fifty minutes, no intermission.