“Ultimately, the best part about this challenging and slick production is that the cast and crew are making a concerted effort to engage their audience and effectively communicate the importance and cultural relevance of the issues raised throughout Bug.” – Jennifer Minich.

Synopsis: Set in a seedy Oklahoma City motel room, the play centers on Agnes, a divorced waitress with a fondness for cocaine, isolation, and guilt. Agnes hides in her hotel room, in a haze of alcohol and drugs, hoping to avoid her physically abusive ex-husband, Jerry, who was just released from prison. Into her sordid life comes Peter, a soft-spoken Gulf War veteran introduced by her lesbian friend, R.C. As Agnes becomes more involved with Peter, he shares his theories about the war in Iraq, UFOs, the Oklahoma City bombing, cult suicides, and secret government experiments on soldiers. What poses the greater danger to Agnes: Jerry’s violence, Peter’s delusions, or all the creepy bugs infesting her room? 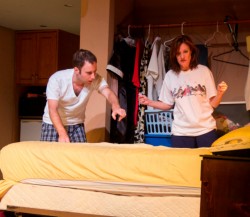 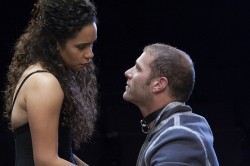 Kathryn Tkel as Vanda and Elan Zafir as Thomas. Photo by Katie Simmons-Barth.

Synopsis: In 1999, Sara Kane took her life by hanging herself by her shoelaces.  Her personal life was riddled with conflict stemming from severe depression.  In one last act of love to the theatre, she wrote what many consider her greatest achievement, 4.48 Psychosis.  She gives us an insight of the human brain in the place between life and death questioning the validity of suicide.  The play is written in a manner, which is not realistic or linear but rather abstract and disjointed, which is appropriate when dealing with issues of mental health—the rational does not apply.  Through the use of video, projections and abstract movement, Iron Crow will attempt to navigate the human brain through Kane’s text in this highly stylized production. 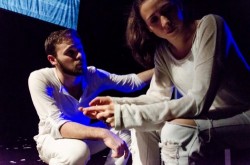 “I suggest to all to hurry and get tickets for some electronic, hair-raising fun!” – April Forrer.

Synopsis: Grab your lab coats and safety goggles, because this one-man show can be explosive! Following his sidesplitting sold-out engagement in 2011, Doktor Kaboom is back by popular demand with an all-new interactive science comedy show, this time focused on the amazing power of electricity. Our favorite stand-up scientist with the thick German accent will keep crowds transfixed and rolling on the floor with his increasingly spectacular (and usuallysuccessful) experiments. With his hilarious improvisational style, no two shows will be exactly the same–you may even be called on stage to help with one of his zany demonstrations! 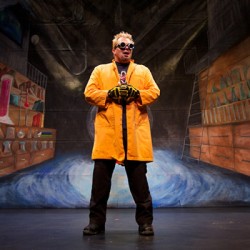 Synopsis: Acclaimed Washington stage actors Nancy Robinette and Craig Wallace return to Ford’s to perform in this beloved classic. When Daisy Werthan causes a car wreck, her son hires hard-working chauffeur Hoke Colburn to look after her. What begins as a hostile clashing of wills between a stubborn Jewish matriarch and a proud black man evolves into a decades-long friendship as the two navigate Civil Rights-era Atlanta. With humor and heartfelt emotion, Alfred Uhry’s Pulitzer Prize-winning play poignantly explores the transformative power of true friendship. 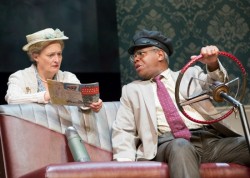