‘A Quick 5’ with Michael Winther 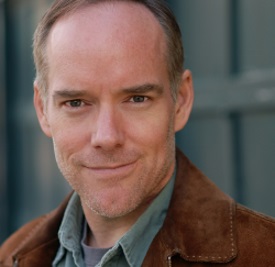 I have seen Michael perform in 1776 where he played the role of the guy who gave the deciding vote for American independence, Judge James Wilson of Pennsylvania. I also remember his wonderful performance in Falsettos in which he played the lead role of Marvin. With Next to Normal Michael plays a character with a delicate balance. He has to balance his own career while deciding what is best for his wife while at the same time not come off as an ego maniac only out for himself. I’m sure Michael is turning in a stellar performance as usual. You have through this Sunday to find out. Check out the abnormal juggernaut hit musical Next to Normal at Center Stage and catch the very talented Michael Winther and company in action.

Oh yeah! It was hard-wired in my genes, I guess. Singing just came naturally to me. I spent a lot of time showing off when I was a kid. I had four siblings and the only way I could get any attention was by singing and being funny. My mother tells me that whenever my parents had guests over for dinner parties, after I had said goodnight and was being sent off to bed, I had the habit of walking halfway down the hall and then dropping my pajama bottoms in a desperate attempt to get a laugh. Even then, I understood the importance of making a good, memorable exit…

The musical Next to Normal is about a family that has to deal with a mom/wife who has Bi-Polar Disorder. If you were put in this situation, how would you handle it and has working on this show changed your initial thoughts on this condition

It’s a really interesting question. I think my feelings about bi-polar disorder have evolved a lot over the last five years or so – in part due to seeing Next to Normal in its original incarnation off-Broadway and then later on Broadway – and in part due to having some relatives and close friends who struggle with clinical depression and bipolar disorder. My family has been blessed with pretty good brain chemistry, so I haven’t had to deal with it myself directly. My friends and relatives have made me realize that it’s not something that you can just “will away” with mental toughness and discipline, positive thinking, a good diet and regular exercise! It’s a disorder and needs to be treated on a regular basis.

That said, I’m not one who believes that one should just grab a pill whenever one’s having a bad day or week or month. Of course, I’m not talking about bi-polar disorder or clinical depression now but I think that we are too quick in this country to medicate away uncomfortable feelings that naturally come up as we struggle forward in our lives. There are many other ways to deal with mild depression. I am no expert on mental health and can only speak from my own experience. As an actor, I deal with a lot of uncertainty in my career and it can become very challenging for me to navigate the times between jobs and I often deal with mild depression. Over the years, I’ve developed and leaned on daily physical and mental practices. I’ve had consistent Bikram yoga practice since 2001 and I’ve been a practicing Buddhist since 1985. For me, having a consistent physical and spiritual practice has really enriched my life and my work as well. I guess it’s helped me to not seek to avoid the inevitable pain and suffering that comes with being alive. I strive to be comfortable being uncomfortable. Of course…it’s a constant challenge!

Next to Normal hits the audience right in the gut with its unflinching look at Bi-Polar Disorder. If you had to describe the show to someone who is a first timer seeing it, what would you most like them to know about the production?

Hmmm…that’s a tough one. I think the most important thing is to not bring too many preconceived notions with you when you come see the show. I think the less one knows about what one’s going to see — the better! My best experiences as a theater-goer have always been when I’ve known very little about what I’m about to see. That way, I can just take the ride and experience it freshly for myself without someone else’s voice in my head telling me what to think.

Also – don’t be afraid to laugh! There’s a lot of humor in the show and I think sometimes audiences are a little afraid to laugh with and at these characters. What I love most about the characters that Tom Kitt and Brian Yorkey have so beautifully created is their sense of self-irony and their keen sense of humor. They’re able to laugh in the face of great adversity. It feels very authentic to me. 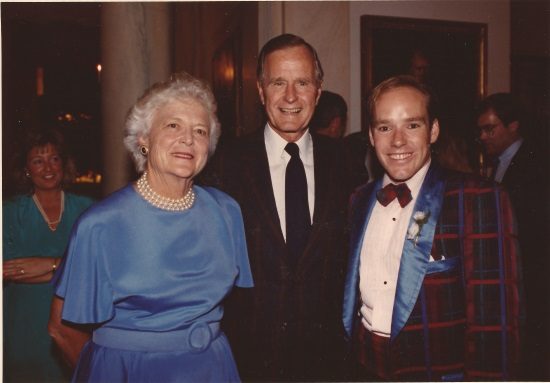 Michael Winther (in plaid) with Barbara and George H.W. Bush.

This is not your first time working at Center Stage. Have you worked at any other theatres in the DC/Baltimore area, and if so, what were the productions?

Way back in 1991–1992, I did a production of Forever Plaid at the Ford’s Theatre in DC for about five months and then we came to the Mechanic in Baltimore for a month. While we were at The Ford’s Theatre, Barbara Bush and former President Bush Sr. became big fans and supporters of the show. They saw the show at the Ford’s and then invited us to do the show in the East Room at the White House. We were then invited to Kennebunkport that August to perform for the then Prime Minister, John Major and his family. Even though I’m a die-hard Democrat, I became a big fan of George H. W. Bush and his wife as people. They were incredible hosts and made us feel like family.

What is next for you after Next to Normal concludes its run?

That’s a good question! Any ideas? Actually, I have a couple of concerts coming up and I’m doing a workshop of a new play by Leigh Fondakowski called SPILL about the 2010 BP Deepwater Horizon tragedy. Leigh was the head writer for The Laramie Project and she and I have worked together several times – most recently on The Laramie Project Cycle at Brooklyn Academy of Music in 2013.

I’ve always loved how eclectic my career has turned out. I’m so fortunate to be able to go back and forth between plays and musicals with the occasional television or film gig peppered in. I’ll be back in DC on April 26th at Washington Performing Arts Society with Robert Kapilow as part of his series, “What Makes It Great?” This time we are delving into the songs of Stephen Sondheim!