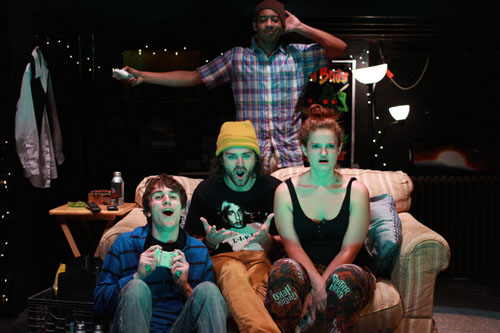 Baltimore has become the place for many up-and-coming theater companies, bringing a vibrant and youthful energy to the city’s performing arts scene. One such group is The Interrobang Theatre Company which presented Leveling Up as part of the Charm City Fringe and is continuing performances through November 16.

This is its second production since the company was co-founded last year by four UMBC theater graduates. For this show, they are in the Mercury Theatre, also the home to the Baltimore Improv Group. This is a tiny space that used to be a storefront, situated just south of North Avenue in the Station North Arts District.

Leveling Up is a perfect choice for this young company. Written by Deborah Zoe Laufer, the play is a very contemporary look a young people and how they relate to each other – or not – in the computer age, specifically gamers. The roommates are Ian, played by Tim German, who gives his character the proper egotism but with a soft core and Tavish Forsyth’s Chuck has a sweet nerdiness. Everyone knows a Zander and Todd Zachwieja does a convincing portrayal of a young man who manipulates people with his charm – and somehow always disappoints. These boys spend most of their day playing video games, having already graduated from college. Jeannie (a sweet, naive Jessie Poole, who is also a co-founder of the company), Zander’s girlfriend, is in her last year as a child psychology major. She is a novice to video games and tries to bring the boys into the real world while being drawn into theirs. Sometimes the acting feels a little stiff but the young actors do a competent job of making their characters believable.

This is a solid presentation by this young upstart on the local theater scene. Baltimore should look forward to more productions as Interrobang grows and matures as a company. It is well worth a look!

They all met at a Radio Shack but Zander was the only one who had the nerve to speak to Jeannie. He is the charming slacker who will do anything to get out of finding a real job including selling one of Ian’s prized possessions that has great value in the gaming world. He takes a commission and gives the rest to Ian but he has clearly broken a trust. But his charm always seems to win people over.

It is apparent throughout the play that all the boys have an attraction to Jeannie. Chuck works as a dealer in a Vegas casino when he is not playing video games. There is brilliant scene when Chuck is helping Jeannie create her virtual character. HIS virtual character soon begins a nearly wordless seduction and she follows suit. What is both sad and comical is that they are sitting right next to each other, breathing heavily and staring at a screen, tapping on their keyboards. Ian catches them and later only reveals his interest briefly and awkwardly.

Ian is a gamer genius who gets paid by helping lesser players around the world “level up.” He is soon courted by the National Security Agency and becomes part of their drone program. To him, it starts off pretty cool, but like the ex-fighter pilot brilliantly portrayed in Grounded across town at The Everyman, he is locked in a trailer for hours while voices fill his headset and he is told when to drop the bombs.

But in this case, Ian’s world has always existed in front of a computer screen and the lines between real and the fake war games he plays at home soon get to him. There are consequences in a real war. He lashes out at Jeannie just to feel something. In the end, there is hope for Chuck and Ian thanks to Jeannie – even after Zander runs away from his friends and responsibilities.

While there are too many uses of the term “dude” and “chill,” undoubtedly this is the way many young people talk. However, this is a relatable play to reach a younger audience with lessons on the consequences of living life too much through the lens of a computer screen.

The director, Sarah Scafidi, has done a good job moving the actors around on the tiny stage which feels and looks like the cramped basement apartment of gamer dudes thanks to set designer Andrea Crews. In fact the whole production staff was spot on, particularly with the lighting design (Austin Byrd) and sound design (Matt Pagan) and the team operating the boards.

This is a solid presentation by this young upstart on the local theater scene. Baltimore should look forward to more productions as Interrobang grows and matures as a company. It is well worth a look!