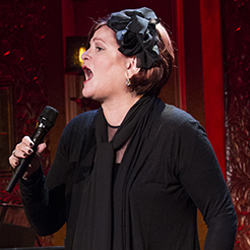 What better way to spend Halloween night than seeing Faith Prince sparkling the Terrace Theatre stage at the Kennedy Center. On Friday, October 31, Prince lit the stage in front of an NYC backdrop with her piano accompanist and long-term friend, Alex Rybeck.  “It’s Halloween and you’re here with me, the Broadway Ghoul!” she exclaimed in surprise and jest, thanking her audience for sharing her cabaret experience with her.

Known for her Drama Desk and Outer Critics Circle Award winning performance as Ms. Adelaide in Guys and Dolls, Prince opened her act with her naturally spunky rendition of a Broadway Medley including “Broadway Baby/Adelaide’s Lament/Broadway Baby.”

Prince spontaneously invited her audience into her life story shortly following her opening with, “Everyone thought I was a little kooky ‘cause I dreamed of changing my zip code,” as she described her days of growing up in a small town called Lynchburg, Virginia. Easing into a humbled and earnest rendition of “Somewhere That’s Green” from Little Shop of Horrors, Prince then jumped into a rockin’ and playful version of “Suddenly Seymour,” singing along with her accompanist, Alex Rybeck, showcasing their fun and off-beat chemistry.

It was absolutely invigorating to see her slapstick comedic side unleashed as she abruptly paused after the number, “Hurry!  It’s Lovely Up Here,” from On a Clear Day You Can See Forever. Prince described an off-stage romance in one of her first summer stock gigs as anything but romantic.  Also playing as romantic opposites in the show, she lovingly teased about “Mr. Oh-So-Wrong,” who would forget the words and lyrics to their essential and dramatically filled romantic moments on stage with the stakes supposedly being high.

The most spiritually fulfilling moment of the evening was Prince’s proclamation of meeting her husband for the first time.  Introducing him as the one who actually does have eyes for her, husband and trumpeter, Larry Lunetta entered the stage delving his heart and soul into the trumpet spotlighting Prince’s vocals making for a soulfully rich and sophisticated dynamic duo.  Together Prince and Lunetta are an idealistic match made in heaven, highlighting the night as one to be thoroughly enjoyed and cherished by audiences and theatre patrons everywhere.

Running Time:  Approximately 1 hours and 15 minutes with no intermission.