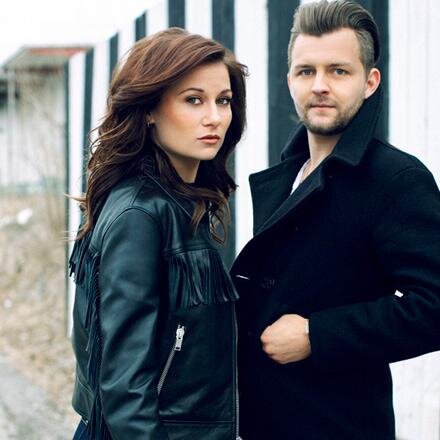 Introducing Rachel Beauregard and Bryan Dawley of Native Run, a best friend pop-country duo from the very heart of Northern Virginia, who are now touring nationwide with American country music artist, David Nail. On Sunday, November 9, Native Run took center stage with David Nail in New York, NY’s Irving Plaza. Opening for Nail, Native Run commanded the stage with an explosive fire as they heated up the venue with their latest hits, “The Party Came Looking For Me,” “Cheap Thrill,” and their latest popular single, “Good On You.” Beauregard and Dawley stand firm within their musical mission by producing music valuing love, heartache, and life. And with a soul as spiritually enriching, complimenting her vivacious personality, it’s no wonder Beauregard beams rays of warm, vitamin D-filled sunshine throughout her crystal clear powerhouse belt.

Look out world, the CMA awards, and Grammies are on the horizon for this hip, up and coming pop-country band.

Before Native Run ever came together as a band, Beauregard and Dawley met through mutual friends in college, attending the same local church where they sang worship together. Realizing the instant chemistry not just within their vocal harmonies, Beauregard and Dawley were inspired to take their spiritual path to a whole new level in beginning a brand new project together, thus leading towards their new band. Prior to lighting the pop-country scene on fire, Beauregard and Dawley’s focus in music hasn’t always been country-related. Growing up, Beauregard immersed herself into music albums ranging from Alanis Morissette’s Jagged Little Pill, to Nirvana and 311 albums, to listening to country Diva, Patsy Cline. Dawley found himself delving into heavy metal, punk rock, and hip-hop albums during his middle school days.

Once they landed themselves in college, Beauregard studied vocal performance and theatre and was also classically trained in German Opera. Dawley’s major emphasis in college transformed from classical music to mainstream music with a desire to further connect himself with the mainstream cultural music scene.

Five years ago, before they were ever known as Native Run, Beauregard and Dawley originated as Deep River, later switching their former name to their current band’s name after receiving an email from another group calling themselves Deep River who owned the trademark. Following countless and generous suggestions from fan emails, the group finally agreed on their new name. Today Native Run’s pop/rock country sound is infused with a sparkling hint of bluegrass fun and soul with real, in-depth authenticity any audience member can easily connect with and delve their spirits into. Grammy award winning producer and publisher, Luke Laird says, “They have a hard to find combination. They really deliver in a live setting and are so seasoned. They have that performer’s sensibility in knowing what the fans will react to.”

Beauregard lets it fly with a genuine raw and sweet sound mixed in with a spitfire edge as she sings, “The Party Came Looking For Me.” In some ways I think her rich, warm performance vocals can be compared to those of Kelly Clarkson and Carrie Underwood. Beauregard is sharp by throwing in a smooth and sassy rendition of TLC’s “Waterfalls,” making it her own with an added pop-country rock twist.   The way she can rap Lisa Left Eye’s part with such slick ease as she connects and jams with her drummer, is unfathomable. Throughout their entire performance, I was left completely warm, giddy, and awe-struck.

Finishing off the evening, ACM and Grammy nominated David Nail took the stage by storm with a powerful opening of his hit song, “I’m a Fire.” Nail’s backup vocalists and guitarists truly know how to blend solidly along with Nail. A highlighted number of the evening included “She Rides Away,” from album The Sound of a Million Dreams.

After unleashing their passions into tours opening for David Nail, Billy Currington, and Lady Antebellum, Native Run is truly making a name for themselves in the music industry.   With heartfelt, melodic tunes, they are reaching out to an exponentially growing fan base embracing the soulful duo into a solid enriched music community. Look out world, the CMA awards, and Grammies are on the horizon for this hip, up and coming pop-country band. We definitely think you look good on us, Native Run.

Native Run with David Nail was a one night only event at Irving Plaza on November 9th 2014. The venue is located at 17 Irving Place New York, NY 10003.

Running Time: Approximately 2 hours and 30 minutes with a 20 min intermission.

For tickets to all upcoming events at Irving Plaza please click here.