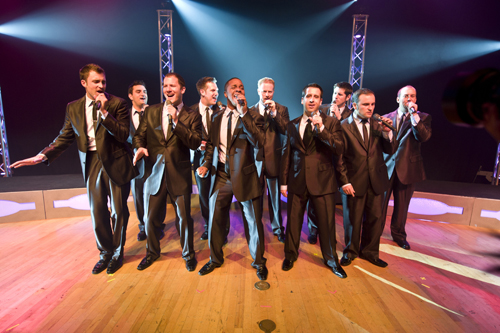 In 2006, a 1998 video of an a cappella group at Indiana University was posted on YouTube. They was performing a comic mashup of holidays tunes called “12 Days of Christmas” and the rest, as they say, is history. In fairytale fashion, the video went viral and catapulted what is now known as Straight No Chaser into the national and international spotlight.

This incredibly talented group of 10 men quit their day jobs in 2008 and signed a record deal with Atlantic Records. The group did a PBS special in 2009 and they have toured rigorously ever since to packed – and often sold out – houses. Though there have been some small lineup changes, the group is as strong and polished as ever. The current group includes Michael Luginbill, Randy Strine, Dave Roberts, Charlie Mechling, Jerome Collins, Walter Chase, Don Nottingham, Seggie Isho, Tyler Trepp, and Steve Morgan. They have also gained a large and loyal fan following aptly dubbed “Chasers” who attend their concerts all over the country. SNC’s success undoubtedly rekindled the interest in a cappella as well as the reality TV competition show “The Sing-Off,” which is reportedly slated to return for a fifth season.

If you love the pure sound of beautiful voices and an evening of joy and laughter, Straight No Chaser is a guaranteed crowd-pleaser for the entire family.

SNC not only gives their audience an incredible show, they are amazingly responsive to their fans. Unlike other professional singers, all are welcome to taking video and pictures during the performances and encourage all to post on the SNC Facebook page. In turn, the group takes photos of their audiences from the stage and asks them the tag themselves. They also interact with their most loyal fans and know them by name. The boys will stay until the last person has been given the opportunity to sign autographs and perhaps get a photo or two.

SNC have been particularly popular around the holiday season with Christmas-themed album releases (Holiday Spirits, 2008; Christmas Cheers, 2009) but have also recorded non-holiday covers with With A Twist, 2010. This tour is supporting the Under the Influence album (and yes you can buy a vinyl version) released in 2013. The deluxe CD includes eight tracks with guest artists who made the songs hits: Sara Bareilles, Phil Collins, Elton John, Jason Mraz, Dolly Parton, Seal, Rob Thomas, and Stevie Wonder. SNC has also released a Christmas single with a keen jab at the way people now interact through social media called “Text Me Merry Christmas,” featuring actress Kristen Bell.

SNC has been making Baltimore a regular stop since they began and there no question of their popularity. With their performance this month, the vast Meyerhoff Symphony Hall was nearly sold out. Even a seat in the last row of the Terrace had a perfect view and the brilliant sound quality of the hall was not diminished. So much so, in the second and final encore, the group went off their microphones to perform. It was pitch perfect.

There is no program so you never know what exactly you will get, but the every selection is a winner. The setting is simple with videos running in the background and a bar table with stools in the center with lights on either side that provide the dazzling lighting effects throughout the show. But these fine singers need no frills. They can sound like a full orchestra or a big band, using only their voices. The choreography is fun and inspired and the audience interaction always a crowd-pleaser.

This evening the group opened with one of this year’s most popular songs (and a YouTube hit), “Happy” by Pharrell Williams and then a medley of Frankie Valli and the Four Season tunes (“Big Girls Don’t Cry” and “Walk Like Man”) with Tyler providing the spot on falsetto sound of Valli. The boys then moonwalked through Michael Jackson’s “Billy Jean” and this year’s hit (especially among the younger set) “Let it Go” from the animated film Frozen. The boys followed up with a Billy Preston medley and then a comic salute to the unsung members of the group, the baritones, using another current pop favorite, Meghan Trainor’s “All About That Bass.” The first set ended with the Otis Redding classic “Sitting on the Dock of the Bay” and “Proud Mary” with Jerome doing his best and very funny imitation of Tina Turner’s dance moves.

The second half of the show included songs that ran the gamut from pop Christmas songs (as well as some beautiful traditional carols) to contemporary tunes. The guys swung into action with a Vegas medley that sounded every bit like the singers were backed by a big band. The songs included “The Way You Look Tonight,” “I’m In Love,” “Come Fly With Me,” and Bobby Darin’s hits “Beyond the Sea” and “Mack the Knife.”

After Seal’s “Kiss from a Rose” from their current CD, Broadway musicals were lovingly skewered with the slightly fractured titles taken from the originals: The Apparition of the Opera, Felines, Lease, The Orphan and The Miserables. A high-energy, fun mix of current pop hits was presented, highlighted by Taylor Swift’s “Shake it Off” – all with brilliant choreography.

The audience was on their feet and the first encore had to include the song that started it all “12 Days of Christmas” and their classic “The Christmas Can-Can.”

If you love the pure sound of beautiful voices and an evening of joy and laughter, Straight No Chaser is a guaranteed crowd-pleaser for the entire family. If you can wrangle a ticket, they will be performing in Hershey, PA on December 6, 2014.