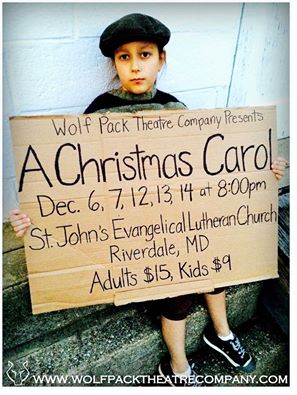 Leary’s adaptation weaves cherished holiday songs into the storyline adding another layer to the characters and providing a festive air   Set and performed in a church sanctuary, A Christmas Carol focuses on the virtues of the holidays such as love, kindness, generosity, courage and faith.  This production seeks to truly capture the spirit of Christmas, and therefore Wolf Pack Theatre Company will be donating a portion of its proceeds to Community Crisis Services Inc. benefitting their Warm Nights Hypothermia Shelter program and St. John’s Evangelical Lutheran Church benefitting their Safe Haven and Bountiful Blessings programs.

Founded in 2014 by William Leary, Wolf Pack Theatre Company is designed to bring fresh, innovative voices to the DC Metro region in an honest and socially conscious way. Wolf Pack is dedicated to producing at least two new plays or musicals each season and allowing talented, untested writers, actors and designers the opportunity to express their point of view. A portion of each production’s proceeds will benefit a charitable organization decided upon by the writer, director, cast and crew.