Theatre Review: ‘As You Like It’ at Shakespeare Theatre Company 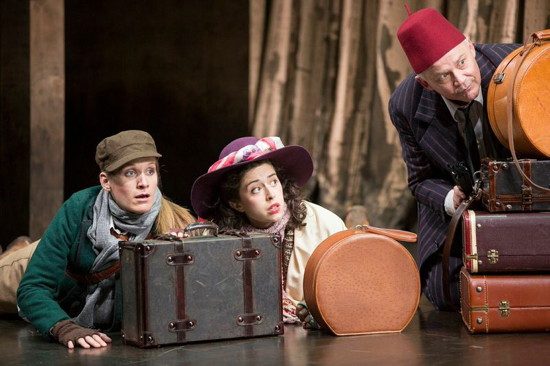 Zoë Waites as Rosalind, Adina Verson as Celia and Andrew Weems as Touchstone in
the Shakespeare Theatre Company production of William Shakespeare’s As You Like It, directed by
Michael Attenborough. Photo by Scott Suchman.

It’s exciting for the Shakespeare Theatre Company that distinguished British director Michael Attenborough accepted an invitation to oversee a production. His choice—and the opening show of the season—is the Bard’s As You Like It.

Attenborough brought along a leading lady he had worked with several times, Zoe Waites. Well, make that a “leading man,” since Rosalind, the character she portrays, spends most of As You Like It dressed as a man.

The result is a felicitous blend of seriousness and humor that characterizes many of Shakespeare’s works and a reflection of the director’s affinity for this play.

As the Program Notes by David Schalkwyk indicate, As You Like It offers challenges as “one of Shakespeare’s most enigmatic comedies. It opens in a real world of social and political struggle, fraternal rivalry and dispossession that would not be out of place in King Lear. It ends with Hymen, the god of marriage, giving his blessing to no fewer than four wedding couples.”

Giving the synopsis of the plot is a challenge unto itself. Yes, dating back to 1599 or 1600, As You Like It is about love. But it’s also about social dislocation: Duke Frederick has usurped the title of his older brother, Duke Senior, and exiled him to the Forest of Arden. Orlando, the son of one of Senior’s loyal lords, is tormented by his brother, Oliver, and flees, also to Arden. But not before he has fallen in love at first sight—and she with him—Rosalind, Senior’s daughter and best friend of Celia, Frederick’s daughter. Frederick then banishes Rosalind, who leaves for Arden in male disguise with Celia and Touchstone, the court fool.

The result is a felicitous blend of seriousness and humor…

In Arden, as the boy Ganymede, Rosalind pretends to talk Orlando out of his love, but of course doesn’t succeed (nor does she want to). Oliver arrives repentant, and falls in love (and she with him) with Celia. The shepherd Silvius, after initial rejection, wins the heart of the prickly Phoebe, and Touchstone, while mostly lusting after the country girl Audrey, eventually agrees to be married as well.

At the end the repentant Frederick renounces his dukedom and becomes a religious hermit in the forest. Joining him is Jaques, a melancholy man who finds court life and multiple weddings too merry for him.

Any Shakespearean actor would relish the part of the bright, quick-witted, yet emotional, Rosalind, who has by far and away more lines to speak than anyone else and is the only woman in any of the Bard’s plays who gets the last word (here, in the Epilogue).

Zoë Waites offers zest and energy as well as the other requirements. There is both humor and palpable malaise in her being a “boy” in love with a boy.

Orlando isn’t Rosalind’s intellectual match, but what he lacks in that department he more than makes up for in ardor. Andrew Veenstra conveys that well, and his response to kissing whom he perceives to be a boy is perfectly timed.

Attenborough, of course, has a sure hand with actors, but some of the directorial choices are mystifying. The silken sheets representing Arden are flexible for staging purposes, but seem a bit bleak.

On the other hand, it’s interesting to present Duke Senior and his men in the forest in dark hues, resembling homeless people sitting around a fire during the Depression. (In fact, their costumes have a ‘30s feel, as well.) The point is well taken that Arden is no idyllic place, if courtiers are displaced there.

Tara Giordano does what’s expected as the dim-witted Audrey, but the degree to which she has been tasked to be sluttish and déclassé seems extreme.

Te’la Curtis Lee has a fine voice and presence as Hymen, though I’m not sure what her following Rosalind about silently really adds to the proceedings.

On the other hand, it was clever having Timothy D. Stickney play both Dukes—with a quick onstage change of outer costumes. His is also one of the stronger performances.

Other standouts in a large cast include Derek Smith, a more-elegant and world-weary Jaques than is usually rendered, but no less a melancholy one. Andrew Weems as Touchstone “attacks” his dialogue with gusto, like a patter song.

Alan Paul is associate director. Jonathan Fensom’s set and costume design enhances the mood in the different locales of the play, as does Robert Wierzel, the lighting designer.

Steve Brush, the sound designer, composed the original music. Also to be cited are Robb Hunter, fight director, especially for the wrestling match, and Karma Camp, who choreographed the charming (but oddly chosen) closing dance.