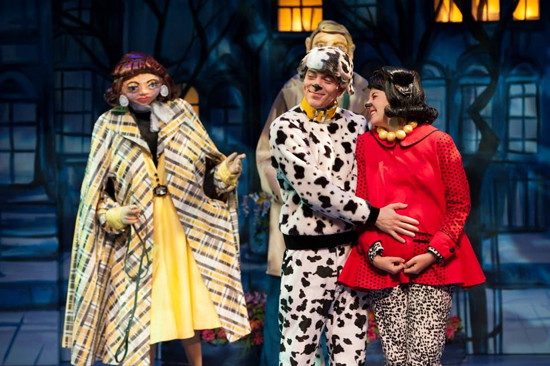 On a walk in Regent’s Park, Missis and Pongo share the news they are expecting a litter of Dalmatians. (L to R: Emily Kester, Jonathan Atkinson, and Caroline Wolfson). Photo by Margot Schulman.

Imagination Stage’s production of 101 Dalmatians, based on the book by Dodie Smith and adapted by Martha King DeSilva and directed by Janet Stanford, tells the story of 99 beautiful black and white puppies, plus a mom and dad Dalmatian. They get whisked away for the sole purpose of becoming black and white spotted coats, gloves and hats at the whim of one of the most well-known villains, Cruella de-Vil. Imagination Stage’s production also tells this classic family story with original songs filled with lyrics about bravery, loyalty and love.

On my way to the show, my daughter and I talked about how we thought they would be able to wrangle 101 dogs on one stage and we came up with some pretty good ideas, but we didn’t get close to the great ideas Imagination Stage came up with – the people characters are larger than life puppets and the dogs have more human characteristics than animal. When it comes time to count out the 101 dogs, each actor portraying a dog on stage represents about 20 dogs and at one point during the show, the actors make a continuous circle around a doorway until all 101 dogs are accounted for.

The entire cast and production crew deserves many accolades for giving all of us another delightful gift of engaging, charming theatre.

The play begins in 1950s London in a Regent Park living room with Mr. Dearly (Vaughn Irving) and Mrs. Dearly (Emily Kester) and their two adult Dalmatians, Pongo (Jonathan Atkinson) and Missis (Caroline Wolfson). All are getting ready to take their evening stroll through the park. We soon find out that Missis is expecting puppies and the entire household gets very excited. On the evening when the 5 puppies are born, each puppy is introduced to the audience in a very clever way.

All is wonderful at home until Mrs. Dearly’s friend Cruella de-Vil drops by and is upset that her furrier company needs a new animal fur to boost sales. When she sees Pongo and Missis and realizes they are about to have puppies, she decides that the spotted dogs’ coats will be her company’s boom, and 101 Dalmatian dog furs are enough for all her clothing and accessories needs. She begins to capture dogs all over England, and Pongo and Missis’s pups are first on the list.

The adventure begins when Pongo and Missis leave home to find their puppies. With the help “Twilight Barking,” a way to pass important messages to other animals all over the country, the puppies are all found, and all 101 Dalmatians find a home at the Dearly’s.

The puppetry in this show is truly magical. Matthew Pauli is the puppet designer, and his human puppets utilize the actor’s body and hand motions, and the upper torso and head is all puppet, but the expressions on the faces convey all of the personality and emotion needed for the actor wearing each puppet to bring their character to life. Sarah Beth Pfeifer as Cruella de-Vil operates her puppet flawlessly; it only took me a few moments of watching her on stage to forget that she is operating this large puppet to become such a sinister character. Daniel Scott Sonntag as the Boxer dog helping Pongo and Missis is wonderful, from his leather jacket-wearing attitude to the way he wags his little stubby tail.

The entire cast and production crew deserves many accolades for giving all of us another delightful gift of engaging, charming theatre.