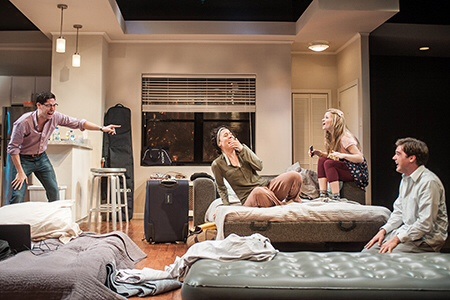 With a title like “Bad Jews” slapping you in the face, it is easy to wonder what other punches this play packs and who should go experience it. Bad Jews, playing at the Studio Theatre, is a must-see for everyone this theatre season. This outrageously funny production transcends race and religion–and even the questioned identity of “Delawarians”–to deliver a seethingly witty commentary on the people we try to be versus the ways our identities are etched upon us.

Written by Joshua Harmon and directed by Serge Seiden, the story revolves around four Millennials –three Jewish and related; one gentile, blonde girlfriend–squashed into a single “spare apartment,” duking it out for a family heirloom following the loss of the family patriarch. Nothing is sacred and no one safe as the characters beat each other down in an attempt to claim their first-right to the cherished piece of jewelry.

Irene Sofia Lucio is a force of nature in her characterization of the passionate, intellectual, and indomitable Daphna, who is desperate to secure the necklace and link herself into the religious heritage her grandfather carried through the holocaust. Alex Mandell gives a scathing performance as cousin Liam, the favoured son and an intellectual Jewish atheist whose articulate arguments rival Daphna in spirit, delivery, and aim; he wants the necklace for its sentimental rather than symbolic value. His girlfriend, Melody, the “song [he] can’t stop singing,” is perfectly played by Maggie Erwin with plenty of blond hair flipping, wondrously awful singing, and just the right amount of leveling to take her from facetious doll to complex character. Joe Paulik, expressively playing the quiet and unassuming brother of Liam, is the undercurrent sweeping beneath the surface of the play and carrying the story through to its crushingly brilliant end.

“I don’t see why any of it matters–where people come from? People are just people,” Melody sweetly sighs at one poignant moment in the play. Go see and decide for yourself what, why and how any of it matters and laugh–maybe even cry–hysterically as you wrestle through one crazy night with four “bad Jews.”

Am I right or am I right?