Theatre Review: ‘Fiddler on the Roof’ at Arena Stage 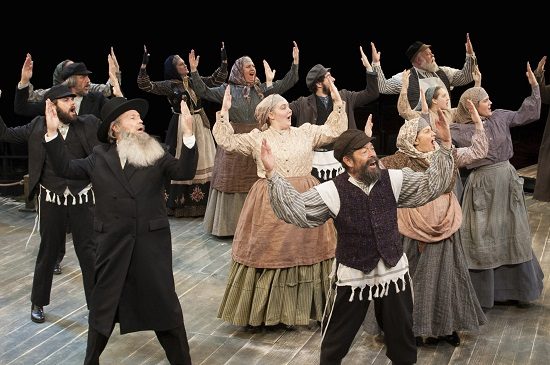 Jonathan Hadary as Tevye and the company of ‘Fiddler on the Roof’ at Arena Stage at the Mead Center for American Theater October 31, 2014-January 4, 2015. Photo by Margot Schulman.

September 22nd marked the 50th anniversary of the Broadway opening of Fiddler on the Roof at the Imperial Theatre.  Producer Hal Prince helped to bring out the best of Joseph Stein who wrote the book, Sheldon Harnick who wrote the lyrics, and Jerry Bock who composed the music.  Together, they helped to create one of the greatest musicals of all time.

Now playing through January 4, 2015, at Arena Stage in Washington, DC, director Molly Smith challenges the audience to experience her non-traditional concepts in this show which is all about tradition.  After all, the opening number is called, “Tradition.”  Molly Smith says, “It’s the concept of tradition and specifically changing tradition that is such an exciting, contemporary idea to me.”

…one of the greatest musicals of all time.

Tevye (Jonathan Hadary), the poor milkman has five daughters: Tzeitel (Dorea Schmidt), their oldest, Hodel (Hannah Corneau), Chava (Maria Rizzo), Shprintze (Shayna Blass), and Bielke (Maya Brettell), their youngest daughter.  Tevye and his wife Golde (Ann Arvia) use the matchmaking services of Yente (Valerie Leonard) in hopes of finding the perfect match for each of their five doweryless daughters.  Breaking tradition, his three oldest headstrong daughters want to find a match on their own.  Life is all about passing on customs for Jews in the Russian shtetl of Anatevka in 1905, where their lives are as precarious as the perch of a fiddler on a roof.  Even more tradition is about to be rattled as an increasingly ruthless government wants to change what kind of people live in Anatevka, including threatening to force Jews from their home.

The role of Tevye was originally played on Broadway by Zero Mostel. After a production on the West End stage in London, Chaim Topol would also go on to star in the 1971 film version.  This iconic role is traditionally played by a physically larger man with an even larger-than-life stage presence.  After all, Tevye also serves as a narrator of sorts who must connect to the audience.

Here, Molly Smith chose to cast Tony nominee Jonathan Hadary as Tevye.  There is no question that Mr. Hadary is a fine dramatic actor.  But some audience members might not like the non-traditional interpretation of the role.  Instead of a booming, robust man with a husky, deep voice, Molly Smith directed Mr. Hadary to be a soft-spoken, mild-mannered man who internalizes much of his feelings.

The most disappointing point for me in the production is the song, “If I Were a Rich Man.”  Not the quality of the song composition itself, of course, but of the interpretation of it.  Firstly, Mr. Hadary’s singing voice is unsupported, weak, strained, and often off-pitch.  He has trouble finishing musical phrases.  The way the song is staged and directed, it has him internalize his longing to be rich, rather than a full-out, no-holds-barred, enthusiastic plea to G-d to give him “a small fortune.”  It is a shame because this song is traditionally a show-stopper.

Another song that lacks spark is “Matchmaker.”  The lack of youthful playfulness in the staging is causing the song to not ignite.  The blending of the vocals is also uneven, especially when there is three part harmony.

On the plus side, Parker Esse’s adaptation of Jerome Robbins choreography works well, especially with the song “To Life.”  The dancing in this song is lively, fun and it tells a story.  What is more, the live orchestra, led by Paul Sportelli, gets to really strut its stuff during the instrumental dance breaks.  The clarinet solo by Rita Eggert and mandolin solo by Steven Walker added to the authenticity.

One of the more successful performances comes from Joshua Morgan as Motel Kamzoil, the tailor who is in love with Tzeitel.  Mr. Morgan manages to be endearing, vulnerable, and yet captivating.  Tzeitel, played by Dorea Schmidt  also gives an authentic, terrific acting performance.  They brought a tear to my eye as they bubbled over with love during “Miracle of Miracles.”

The most memorable part of the production is something I can’t reveal.  Yes, I will leave it a surprise, but I will tell you that it happens during “The Dream.”  This song which tells the story of Tevye’s spooky nightmare really allows for costume designer Paul Tazewell, set designer Todd Rosenthal, and lighting designer Colin K. Bills to get creative.  There are details in some of the costumes for this song that I noticed that also add special meaning.

For fifty years Fiddler on the Roof has earned respect as one of the greatest musicals of all time.  Songs like “Sunrise, Sunset,” “Matchmaker,” and “If I Were a Rich Man,” will always be a “Tradition” in the American musical theatre.

Running Time: approximately 2 hours and 35 minutes, including one intermission.

Advisory:  aisles are used by the actors for entrances/exits.