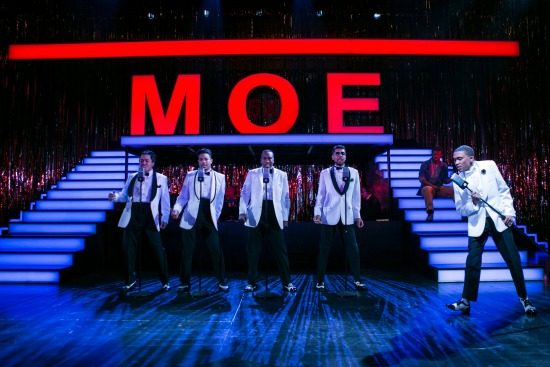 What could be better than an evening of the music of Louis Jourdan and his influential jumping jive that paved the road through jump blues to hard R&B and rock ’n’ roll?

That’s what Clarke Peters probably thought when he put Five Guys Named Moe together 20 years ago as well. And it’s probably what keeps audiences coming to its revivals, the latest of which is playing at the Arena Stage in Washington.

A jukebox musical doesn’t have a lot of requirements — find a way to string a number of songs together in an order that makes some narrative sense is all.

Moe does it through the guise of NoMax, a hapless guy who’s feeling low for having just split from his girl, who gets solace from his radio, first from the opening “Five Guys Named Moe,” Jordan’s first big chart hit, and then through the magical embodiment of the characters so well delineated in its verses, jumping out of the airwaves.

These five try to uplift and advise the guy with the music’s snappy lines done in a similarly showy way.

Director Robert O’Hara, who has been counted on to write and direct crazy turns at Wooly Mammoth, wasn’t comfortable with letting the musical stay in Jordan’s realm.

Instead, he announced he was bringing it forward in time nearly a half century, turning the five Moes to a ‘90s style boy band (Backstreet Moes? Color Moe Badd?). He would also be adjusting the music and choreography accordingly.

At first this sounds like a terrible idea, mostly because of personal preference for rambunctious jump blues over cheesy ‘80s boy bands.

But what if it worked?

It might sound cool to hear these songs awash in the kind of keyboards and upfront percussion inherent in the music of producers Jimmy Jam and Terry Lewis. Or to see the performers in fades or yelling “Yow!” like Cameo’s Larry Blackmon.

Yet for all the advance warning, O’Hara’s production never fully commits to the time shift.

Ramos’ big showcase is a stage-filling, light-up staircase with oversized MOE letters that also light up — the kind of set N’Sync might have devised for an MTV VMA performance.

And instead of any New Jack Swing, or percussive snap of the 80s, Darryl G. Ivey’s musical direction doesn’t alter the songs all that much. With de-emphasized horns and double keyboards, it just seems a little more thin sounding. David Marsh’s nimble bass is mixed way up front and drummer Mark Carson applies a laid back funk style different from Jordan’s time.

Aside from a couple of numbers where Carson lays down the familiar go-go style and Clinton Roane’s they rap the verses in things like “Saturday Night Fish Fry” and “What’s the Use of Getting Sober” it’s all fairly close to the source material.

The thing we learn about Jordan’s music in the revue is that it didn’t lend itself to a lot of different approaches. A lot of his hits were little ditties that don’t allow themselves to be opened up. Worse, few songs really allow much of the cast members to really haul back and sing.

As it is, Kevin McAllister, who is amusing as the downtrodden NoMax, gets our attention by working out the opening “Early in the Morning” and Paris Nix’ Eat Moe has the luck of singing the second act’s central ballad “Don’t Let the Sun Catch You Crying” (which is not the Gerry and the Pacemakers hit).

Other than that, the remaining Moes – Jobari Parker-Namdar, Sheldon Henry, Clinton Roane and Travis Porchia — are all very serviceable in their singing and dancing, but generally bring nowhere near the grit and pizazz that even the poster expresses.

That may also be because of the director’s approach: His move to the boy band era seems to be modeled after last year’s Justin Timberlake video for “Suit & Tie” — all retro, with its bandstand, black and white film and sharp tuxedoes.

Arena’s production has the same sense of ersatz past — modern and classic at the same time with no real footing in the real world where Jordan’s music stomped, sweat and thrilled.

For all the worry about grinding and hip jutting, Byron Easley’s choreography is less racy than the average awards show performance.

Most of this Moe is so benign it kind of pleasantly runs along and until they start to involve the audience, plucking females out of the audience to dance in one number, employing others to clap elsewhere or respond to “Caledonia.”

When the audience females boogie on stage, it only underscores the fact that the play has no women in it at all. And many of the novelty tunes in the first act are sexist and out of date — “Brother Beware,” “I Like ‘Em Fat Like That,” “Messy Bessy,” “Safe, Sane and Single” — so much so that one character apologizes in the second act for the chauvinistic tone.

If there’s an update O’Hara really wanted to work on, it could have been that.

Running Time: One hour, 45 minutes, including one 15-minute intermission.

Advisory: Fine for most ages.