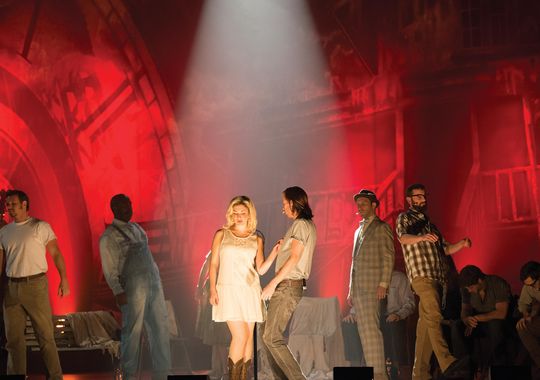 The cast of Ghost Brothers of Darkland County. Photo by Harry Sandler.

Through the decades there have been many musicals that have not reached their full potential because of an element that didn’t measure up. More often than not, the book is the main culprit. Musicals such as The Baker’s Wife, Rags and Taboo all suffered from inadequate books thus bringing the scores for these shows down with them.

Ghost Brothers of Darkland County features a score by legendary rocker John Mellencamp that fuses traditional country with rock, blues and musical theatre. The result is a score worthy of a Tony Award if this show were to go to Broadway.

The book is written by king of horror Stephen King whose idea is a good one. It basically is a story of a father named Joe McCandless (Billy Burke) who does not want what happened to him as a kid to happen to his two sons. Joe’s two brothers Andy and Jack (Travis Smith and Peter Albrink) were always feuding. Ever since Jack beat Andy in a shooting match, there has been jealousy and animosity between the two boys. This includes both wanting the same girl Anna Wicklow (Kylie Brown). Young Joe (Zac Ballard) is witness to a horrible incident between Jack and Anna and swears he will never tell anyone what happened. That is until now. Joe’s sons Drake and Frank (Joe Tippett and Lucas Kavner) are following the same path of jealousy and rage towards each other. Frank has just gotten a half million dollar publishing deal for his paperback while Drake is stuck performing with a two-bit bar band. They are both fighting over Jenna Farrell (Kate Ferber) who looks mysteriously like Anna with matching blonde hair. Then there Joe’s wife Monique (Gina Gershon) who is an alcoholic.

…a score worthy of a Tony Award if this show were to go to Broadway.

At the outset, all of this would sound like a good premise for a musical but King’s story is more suited to a novel or film the way it is written. It doesn’t come off as very theatrical and then when the story should end, King goes to a place with the story that it doesn’t need to go to.

In an attempt to make the story work for the stage, King has introduced two plot devices. First is a mysterious devil like overseer called The Shape (Jake La Batz) who manipulates the characters throughout the course of the show. Secondly is the Zydeco Cowboy (Jesse Lenat) who is kind of a balladeer. As talented as the two performers are who play The Shape and the Zydeco Cowboy, their characters detract from what the story is really about.

John Mellencamp on the other hand has written a score which is totally theatrical and moves the story along. A few standout numbers include “That’s Me,” which is The Shape’s opening song and a first act finale gospel showstopper called “Tear This Cabin Down” featuring soloist Eric Moore.

Mellencamp’s music is played by a four member ensemble made up of members from his band. Andy York (Guitars, Vocal Arranegments and Music Supervisor), Dane Clark (Percussion), Jon E. Gee (Upright Bass) and Troye Kinnett (Keyboards and Harmonium) in a few words, make beautiful music together and don’t over power the singers, which is always a delicate balance when there is a pop score.

Director Susan V. Booth has directed the show in a quasi concert setting by setting the story in a radio studio complete with live sound effects.

She also has gotten wonderful performances out of her cast. A few standouts include Billie Burke as Joe. His portrayal of a father wanting something better for his family is quite touching and his vocals on “How Many Days” packs an emotional wallop. Gina Gershon as the alcoholic Monique does well with her feature called Monique’s Song and Zac Ballard and Young Joe makes a good showing against the adults with “My Name is Joe.” Kylie Brown as Anna grabs you right away with “That’s Who I Am” while Jake La Batz as The Shape is appropriately sleazy and cold with songs like “Lounging Around in Heaven.” The full ensemble hits maximum power with the show’s closer “Truth.” Considering the musical director for the production is legendary 13 time Grammy Award winner T. Bone Burnett, it comes as no surprise that the vocals sound perfect in every way.

Ghost Brothers of Darkland County premiered in Atlanta at Alliance Theatre in 2012. At the time, high praise came upon the score with the book not faring as well. It seems to me that Mellencamp’s score could stand on its own as an oratorio and fare better than it does being married to Stephen King’s convoluted libretto. It does not help that King has said that he doesn’t want to do any revision to improve his book so now even if Mellencamp wants the show to continue, it will be stymied and that’s a real shame.

With a superb cast and band, here’s hoping Ghost Brothers of Darkland County gets the necessary fix it needs to get itself to Broadway and give Mellencamp his well deserved praise.

Running Time:Two Hours and 40 minutes with one intermission.

Ghost Brothers of Darkland County was a one night engagement at The Warner Theatre on November 15, 2014. For upcoming tour dates click here.