Theatre Review: ‘How We Got On’ at Forum Theatre 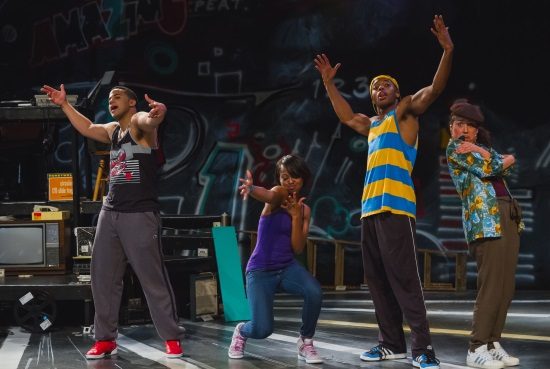 Whether you’re a Generation X, a tweeting Millennial, or an emerging Generation Z-er, How We Got On will leave you appreciating these two letters: MC.   That is, feminist Rap pioneer MC Lyte, or of course, famous MCs Big Daddy Kane and Biz Markie.

…a vivacious work of theater that I would be happy to watch again.

Yes, we are talking about rap music here. But not the popularized form you might hear in a nightclub today. Idris Goodwin’s 80-minute one act peeks into rap history through the eyes of three suburban teenagers.  All black or Latino, Goodwin’s characters give candid insight into the dichotomy of rap culture as it was experienced by suburban minorities a mere decade after its conception in the late 70s.

After its premiere at Louisville’s 2012 Humana Festival, How We Got On has been swiftly making its way throughout the country and has graciously landed this month at Silver Spring’s Forum Theater.  To put it simply, HWGO really has “got on”.

And not without good reason.  Directed by master teaching artist Paige Hernandez, this show is as fun as they come.  A lyrical mix tape of disciplines, the play is layered with freestyle verse, beat-boxing and a fair amount of hip-hop choreography.  Set to a dynamic soundtrack of late 80s rap, designed by Thomas Sowers, atop a stage outfit with dance floors, boom boxes and graffiti, designed by John Bowhers,  HWGO’s plethora of cultural and linguistic references make it an unstoppable crowd pleaser.

There is no weak link in the four-person cast.  Aspiring rapper Hank, aka Henry Charles, is played with youthful animation by Manu Kumasi.  His opponent-turned-partner Julian, played by Thony Mena, ballasts Hank’s boyish enthusiasm with charming conceit.

Obviously, no “crew” can be complete without a girl, whose role is filled by the assertive and sharp Luann, played gracefully by Kashayna Johnson.

DJ-ing the teenagers’ story is Alina Collins Maldonado as “The Selector.” Maldonaldo’s use of gesticulation and voice to embellish story passages, while seamlessly serving as all three of the characters’ fathers, is truly masterful.  Under Hernandez’s direction, the cast demonstrates effective comic timing and natural exuberance, giving authenticity to the script’s adolescent dialogue.

Set in the suburban midwest circa 1988, this modern coming-of-age piece captures the angst and idealism of puberty, the confusion of being a rap-lover inside a sea of suburban rockers and even shines light on the creative process as, in a scene atop a water tower, Luann confidently advises Hank to “breath in joy, breath out the rest”.   It is a vivacious work of theater that I would be happy to watch again.

Advisory: Suitable for children over 12 due to minor language and adult topics.

How We Got On runs through November 22, 2014 at Forum Theater, 8641 Colesville Road, Silver Spring, MD.  For tickets and more information, click here.