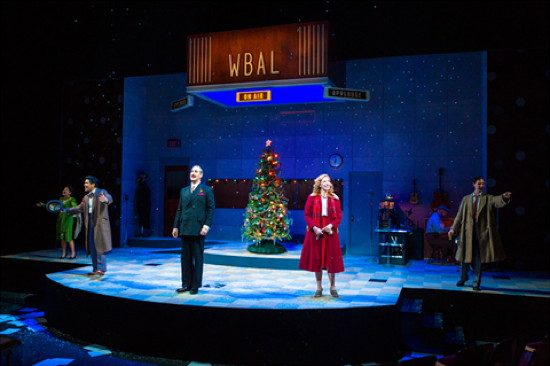 The cast of ‘It’s a Wonderful Life: A Live Radio Play.’ Photo by Richard Anderson.

’Tis the season and it just would not be the holidays without a viewing of Frank Capra’s 1946 Christmas movie, It’s A Wonderful Life, starring Jimmy Stewart and a cavalcade of Hollywood’s finest character actors. This year, Center Stage is presenting this beloved classic as a live radio show, adapted from the film by Joe Landry. The play brings back the days before television (and computers) when families huddled around the radio for news and entertainment. In fact, Jimmy Stewart and Donna Reed, who played his wife Mary in the film, performed the film as a radio play in 1947 for Lux Radio Theater. The story’s genesis goes all the way back to Dickens’ A Christmas Carol which inspired the 1930s short story by Philip Van Doren Stern called “The Greatest Gift, ” which was adapted for the film.

Director Nelson T. Eusebio III has smartly chosen to give this production local color, which is an added treat. The set by Michael Locher is a wonderful recreation of a vintage WBAL radio studio, complete with On Air/Applause signs. The audience is both observer and participant. To break up the scenes, the cast performs commercial jingles from Baltimore stalwarts like Old Bay and H&S Bakery. Kudos go to the Foley artist, Anthony Stultz, who provides all manner of sound effects and music to help bring the story to life.

For this holiday season, Center Stage has given Baltimore a heart-warming and delightful gift that will captivate theatergoers of all ages.

Soon the microphones disappear and scripts are tossed over the front of the stage creating an odd landscape of white paper below. The actors and audience become completely engaged in the world of Bedford Falls. Costume designer Alixandra Gage Englund has recreated the era perfectly. With small costume additions – a hat, a pair of glasses, a fur – and with a physical or vocal change by the actors, the different characters come to life.

George Bailey (the tall, lanky Joseph McGranaghan fits the bill in the Jimmy Stewart role) is a young man with big dreams who can’t wait to leave his small town and see the world. But circumstances keep derailing those dreams and ultimately he stays, marries his sweetheart, Mary (in a lovely performance by Chiara Motley), and has three children. Barely making ends meet himself, he works tirelessly to keep his late father’s Savings & Loan afloat in order to give the working-class citizens of his town the opportunity to start a business or have a home of their own. George is the only alternative to the greedy, heartless Scrooge-like Potter who owns everything else in town.

It is now Christmas eve, George is faced with a crisis at the bank that could be his ruin. He considers drastic action only to have a sweet-natured, Tom Sawyer-loving angel, Clarence intervene. The angel needs just one more assignment to earn his wings and up to this point, has been watching (as we have) George grow from a boy to a man in a series of flashbacks. Clarence grants George his wish –that everyone would have been better off had he never had been born. The lesson, of course, is how much George and his decisions have touched the lives of so many. (Although I have always taken issue with the contention that the beautiful Mary would have ended up a very young, “old maid” librarian had she not met George.)

The rest of the cast (Pun Bandhu as Clarence and others and Eileen Rivera as the town floozy, Violet Bick and others) do an amazing job jumping from character to character though sometimes lacking in the vocal variation needed to delineate the different roles. It is Ken Krugman who gets the opportunity to appropriately and effectively chew the scenery. He does his best imitation of Lionel Barrymore (who portrayed Potter in the film) and the absent-minded Uncle Billy who both set George’s crisis in motion – at one point playing both the characters at the same time in a crucial scene. He is also perfect in the role as radio show host, Freddie Filmore, with all the theatricality required.

For this holiday season, Center Stage has given Baltimore a heart-warming and delightful gift that will captivate theatergoers of all ages.