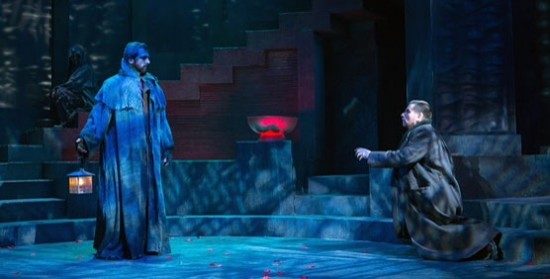 Lovers of Shakespeare and theatre in general should head over to Folger Theatre for a treat with the chilling Julius Caesar, directed by Robert Richmond. This timeless tragedy resonates today from the chilling, crypt-like single set of its staging, as Rome teeters in turmoil from the political ramifications of Caesar’s murder by his peers and the most noble of men.

Caesar, played by Michael Sharon, strides godlike and boastful across the stage before his untimely death, only to return cold and ghostly to roam the earth as an evil spirit seeking revenge. Louis Butelli, as the general Cassius whose political maneuverings engineer the fall of Caesar, gives a compelling performance of a controlling man who wants more humanity and less royalty in the government, but who is unable to manipulate the consequences that fall from the gap between idealism and reality.

For all Cassius’s brilliant designs, the cult of personalty embodied by Mark Antony, played by Maurice Jones, wins the country in the aftermath of bloodshed through his ability to sway the hearts of the populace. Et tu, Brute? Anthony Cochrane’s portrayal of the idealistic to the point of naive Brutus, the “noblest Roman of them all,” gives much fodder for audiences to ponder with the gap between what we might want for a country in ideology, and what that ideology may look like in the end, when history has been written.

There are many wonderful moments in this production that bring the old Roman struggle in government to mirror our world today, from the way that the politicians speak to each other and their audiences from their pulpits across stage as if conducting a modern political debate, to the depiction of cult of personality and campaign smearing, and even to how citizens are engaged with and swayed by parties.

Set in an androgynous time period with costuming by Mariah Hale which is more steam-punk than Roman up until war breaks out, Julius Caesar moves forward in leaps to a World War I era complete with helmets, artillery, and gas masks. Scarlet roses, flickering flames, and blood contrast fiercely with the coolness of the set and illuminate the darkness of plot and heart. Freaky Death-like characters chant across the stage, morphing into solid characters and then back again into ghostly form, creating an atmosphere in which everything within the production is easily transported into modern times by the smallest leap of imagination and Brutus, Mark Antony, Cassius, Caesar, and the rest of the excellent cast can all find their reflections in politicians and citizens of our world today.

This hair-raising ghost story trails its eerie tendrils into our world today with fog, fantastically dark lighting and sound effects, and the haunting of actions that become bigger than intent–more malevolent and willful and able move on their own to effect change that can barely be fathomed at the conception of an idea or the enacting of choice. As the ghostly Caesar returns to turn the bloodied swords of his betrayers upon their own masters and strands of control vanish with fog into the darkness, what can happen in the constructing and continuing of a nation takes shape in the shadows.

“Tell me, good Brutus, can you see your face,” Cassius asks at the play’s beginning. “No, Cassius; for the eye sees not itself, but by reflection, by some other things.”

And so this production holds a mirror to us all and provides an opportunity for us to look at what might be our own face, what could be our own fate, and go back out into the world from there.